Pacifism as an Enemy of Peace

The literary careers of C.S. Lewis and George Orwell overlapped in some interesting ways.* Today we will consider a rather odd British personality mentioned by each of them in wartime essays, Colonel Blimp.

Colonel Blimp was a cartoon figure, inspired by a conversation between two military officers who were arguing that “cavalry” officers should continue to wear spurs even when they migrated into tanks.**

At one time the cartoon was so popular that Lewis wrote:

It may well be that the future historian, asked to point to the most characteristic expression of the English temper in the period between the two wars, will reply without hesitation, “Colonel Blimp.” (“Blimpophobia”).

The good colonel echoes similar foolish notions as he blusters about in a caricature of pompous military commanders. Blimp is retired, but harangues all within earshot about the wisest course for the nation.

Orwell wrote derisively of the military and imperialistic middle class, that he called “the Blimps.” He drew the label from the “colonel with his bull neck and diminutive brain, like a dinosaur.” (“The Lion and the Unicorn”).***

The cartoon above illustrates how Colonel Blimp is certain he has the solution to winning the arms race. The frame to the right shows that he believes his wisdom extends beyond the military to politics in general.

In “Blimpophobia,” Lewis offers advice which proves apropos for our modern age. Today, as fanatical barbarians seek to destroy civilization, enlightened nations and individuals must be vigilant.

One dimension of that vigilance involves walking the fine line between unbridled nationalism and self-absorbed pacifism. When he wrote, Lewis was worried about the anti-war sentiment that threatened to undermine Britain’s response to the Nazis.

Lewis, a wounded combat veteran of the Great War, recognized the truth of the Colonel Blimp caricature. He said something veterans recognize even more clearly than civilians. There is an overabundance of preening and stupidity in the military.

The infection of a whole people with Blimpophobia would have been impossible but for one fact—the fact that seven out of every ten men who served in the last war, emerged from it hating the regular army much more than they hated the Germans. How mild and intermittent was our dislike of “Jerry” compared with our settled detestation of the Brass Hat, the Adjutant, the Sergeant-Major, the regular Sister, and the hospital Matron!

Now that I know more (both about hatred and about the army) I look back with horror on my own state of mind at the moment when I was demobilized. I am afraid I regarded a Brass Hat and a Military Policeman as creatures quite outside the human family.

Still, he said we cannot allow that sad truth to cause us to deny the requirement to maintain a strong defense. “A nation convulsed with Blimpophobia will refuse to take necessary precautions and will therefore encourage her enemies to attack her.”

C.S. Lewis warned his countrymen of the dangers military-phobia during the Second World War. And—among the war-weary nations of the free world battling jihadism—we are wise to heed his wise words today.

The future of civilization depends on the answer to the question, “Can a democracy be persuaded to remain armed in peacetime?” If the answer to that question is No, then democracy will be destroyed in the end. But “to remain armed” here means “to remain effectively armed”. A strong navy, a strong air force, and a reasonable army are the essentials. If they cannot be had without conscription, then conscription must be endured. (C.S. Lewis, “Blimpophobia”).

* In “A Literary Phobia,” I compared some advice they offered to writers. The counsel in question sounds similar on the surface, but actually differs. In “Orwellian Advice,” I contrast the two authors in much greater detail.

** Blimp’s creator, David Low, resided in London but was actually a New Zealander. 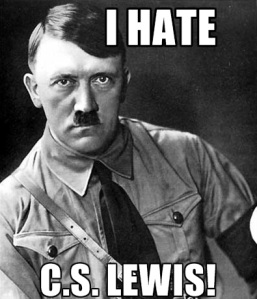 “Meme.” A ubiquitous word among younger generations, but a concept still rather foreign to many who are slightly more “mature.”

The word was introduced by Richard Dawkins in 1976 and means an idea or social behavior that is transmitted by repetition “in a manner analogous to the biological transmission of genes.” Dawkins echoed the sound of “gene,” using the Greek word mimeisthai (to imitate).

Some memes are quite comical. Other quickly grow wearisome (remember the “dancing baby?”).

One I find particularly creative is a scene of Hitler in his bunker during the final days of the Third Reich. The dialog is in German, and the ingenuity is manifest in all of the hilarious subtitles that people create to coincide with the actions of the characters.

I’m sure there are many tasteless examples (to be avoided), but during the last few years I’ve viewed a couple of dozen and found most quite entertaining.

When I discovered a website that allows you to create your own version, I couldn’t resist. And, of course, I could think of no subject better suited to coinciding with Hitler’s demise than the heroic work of C.S. Lewis. In just a moment I’ll share a link to my film “adaptation.”

Lewis, of course, was a patriot who volunteered for the British army and served on the frontlines. He was seriously wounded. (He was not a Christian at the time.)

During the Second World War, Lewis supported the war effort from home. He provided tremendous encouragement to his countrymen via well-received talks broadcast on BBC. And this is the inspiration for my “take” on the Hitler Bunker meme.

His sequel to The Screwtape Letters, “Screwtape Proposes a Toast,” mentions the madman by name. Portraying the demons at the banquet as feasting on the souls of the damned, Screwtape complains:

. . . it would be vain to deny that the human souls on whose anguish we have been feasting tonight were of pretty poor quality. Not all the most skilful cookery of our tormentors could make them better than insipid.

Oh to get one’s teeth again into a Farinata, a Henry VIII, or even a Hitler! There was real crackling there; something to crunch; a rage, an egotism, a cruelty only just less robust than our own. It put up a delicious resistance to being devoured.

Curiously, in English Literature in the Sixteenth Century, Lewis mentioned how Hitler could be viewed in a humorous light.

The mixture of farce and terror would be incredible if we did not remember that boys joked most about flogging under Keate, and men joked most about gallows under the old penal code. It is apparently when terrors are over that they become too terrible to laugh at; while they are regnant they are too terrible to be taken with unrelieved gravity. There is nothing funny about Hitler now.

Lewis’ point, accurate I believe, is that in the terror of the experience itself, humor can provide some relief. Laughing in ridicule at the source of the horror can help to preserve our sanity. Only in the aftermath—once the threat has been dispatched—can we allow the true magnitude of the carnage to be comprehended. And, in that moment, there is nothing at all that is funny.

Of course, years later, when the sights and smells of Dachau are no longer recalled by the living, things shift once again. (Very few of those tragic victims or liberating heroes remain.) When the scarred battlefields have been covered with velvet grass, and it was no longer even “dad’s war,” but now “grandpa’s” or even “great-grandpa’s,” the bitterness has grown stale.

Today, it is natural to scorn and laugh at the tragic dictator who caused so much sorrow. He was a pitiful human being, and without minimizing his crimes, it is fitting that he be ridiculed once again.

The fact that at a certain point it becomes acceptable to ridicule a monster, is the premise behind the hilarious film “The Producers.” If you’ve never seen it, by all means take a moment to watch the theme song, “Springtime for Hitler.” For a cinematic example of Hitler-ridicule, there may be none finer than that “musical” (overlooking the tasteless burlesque costumes).

Of course, true to Lewis’ maxim, ridicule was also heaped upon the “Bohemian Corporal” during the war itself.

The classic example would be Charlie Chaplin’s celebrated “The Great Dictator.” (In addition to starring in the film, Chaplin wrote, directed and produced the movie. Oh, and he also co-composed the music.) The film was made in 1940, while war already raged, but prior to the entry of the United States.

Chaplin’s movie confirms Lewis’ contention that we should not joke about such matters while the wounds are raw. We learn from Chaplin’s My Autobiography, that in the post-war realization of the depth of Hitler’s evil, he regretted treating him with such levity. “Had I known of the actual horrors of the German concentration camps, I could not have made The Great Dictator, I could not have made fun of the homicidal insanity of the Nazis.”

[Best if viewed in the order presented, beginning with the external link to my parody.]

A Visit to the Cinema

“Springtime for Hitler and Germany” from The Producers

The Three Stooges actually beat Chaplin to the screen with their short, “You Nazty Spy!” The sequel, “I’ll Never Heil Again” was released the following year.

A Scene from “Nazty Spy”

And finally, returning full circle to the original meme in which I participated, I was surprised to discover a version of it in which Hitler views the trailer for the 2012 Three Stooges movie. (Apparently, despite their rather disrespectful treatment of him, according to this meme der fuhrer was a fan!) And with that, today’s Hitler cinema will close.