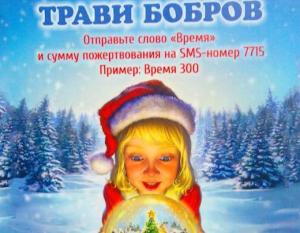 A mere 375,000 rubles buys a fair amount of publicity in Russia; just be sure to proofread the product.

This Christmas season one Russian charity hoped to encourage readers to live good lives, but instead they published a brochure that encouraged beaver genocide.

Beavers are particularly vulnerable rodents. They are quite gentle, and even Talking Beavers are poorly equipped to defend themselves.

The lovely scene on the leaflet featured an innocent girl gazing into a snow globe. Emblazoned above it was supposed to read “Do Good.” Instead, the Russian words spelled out “Exterminate Beavers!”

It just bears out the maxim, “proofread before you publish.” In this case, one could easily add: “if the work is translated, make sure the proofreader understands both languages.”

Some errors are especially heinous.

He was sometimes the victim of inadequate editorial review. So it comes as no surprise that he preferred to see galleys (the uncorrected typeset proofs) of his work before actual publication.

The following reference from a letter in which Lewis attributes the need for such as due to his own poor penmanship, rather than the carelessness of others. This is typical of his generosity, since part of the duties of editors (and pharmacists, for that matter) is to be able to decipher the scribblings of authors (and physicians). Mark Twain did not share Lewis’ grace in this matter.

When his friend Dorothy Sayers died in 1958, Lewis was unable to attend the funeral in London. He was, however, honored to write a panegyric for the service, which was read by one of the bishops in attendance. Following the event, Sayer’s son, Anthony Fleming thanked Lewis and asked if he might include the eulogy in possible collection.

Thank you for your most kind letter. I am relieved to find that the little speech has pleased those whose approval at such a time matters most—it is so easy to go wrong in a thing of that kind and so to give offence.

I am perfectly willing that it should be printed, but please ask whoever sees to it to be sure and let me see a proof. Even if printers made no mistakes, my villainous writing nearly always leads to some.

Lewis, of course, was referring to a literal manuscript, a document written by hand. One assumes that the Russian publisher was given a typescript, so they could not use “villainous writing” as an excuse for their error.

Still, I suspect they were given the text in one language, English perhaps, and asked to translate it for publication. In that case, who actually is responsible for the mistake?

I choose not to worry about attributing liability in this matter. I’m content to use this winter mistake to remind me of the importance of proofreading.

Oh, and on behalf of all of the beavers in Russia, I am relieved to know they will not be distributing these murderous words.