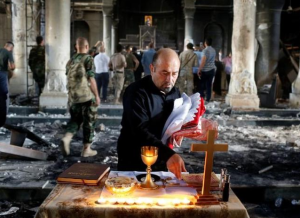 A bomb has driven worshipers from their churches and homes on Christmas. Ironically, this did not transpire in lands where war currently rages. Instead, it was a British bomb intended to end German lives.

The weapon was huge, nearly two tons in weight, and it’s explosion would have been no less lethal today than when it was originally dropped.

The bomb, known as a blockbuster, was the largest of its kind dropped by the RAF during aerial attacks on Germany in the second world war. It weighs 1.8 tonnes and, if exploded, could damage all buildings within a one-mile radius.

As I have worshipped and reflected during this Christmas season, the story of this bomb has continued to intrude on my thoughts.

On that first Christmas night a group of shepherds heard music that has now echoed for millennia.

Suddenly a great company of the heavenly host appeared with the angel, praising God and saying, “Glory to God in the highest heaven, and on earth peace to those on whom his favor rests.”

God’s call to peace on earth and his desire for good will among his children—gifts already given to the world in the birth of Jesus—cannot be negated by the weapons of man.

As C.S. Lewis wrote, “Once in our world, a stable had something in it that was bigger than our whole world” (The Last Battle).

Still, in this moment, when this long forgotten and deeply buried blockbuster bomb can disrupt the traditional Christmas schedule, we see a vivid contrast between the good God desires for us and the ill we too often bear for one another?

A Warzone Witness to the Celebration of Christ’s Nativity

The entire world is aware of the genocide of Christians and Yazidis being conducted in the Middle East by Jihadists. This Christmas, however, marked a moment of encouragement.

Two years after being driven from their city by the Islamic State, Christians were able to return to the recently liberated city of Qaraqosh to worship God.

The church structure had been desecrated, but the presence of God among his gathered people, has reconsecrated it.

Christianity in northern Iraq dates back to the first century AD. The number of Christians fell sharply during the violence which followed the 2003 overthrow of Saddam Hussein, and the Islamic State takeover of Mosul two years ago purged the city of Christians for the first time in two millennia. (Reuters)

Despite the hatred some people hold for others, and the violence they inflict, it is encouraging to recognize that no power in this world can defeat the miracle that transpired on that first Christmas Day.