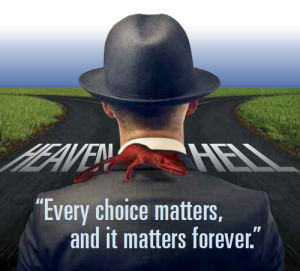 If you live in one of the cities listed below, you will definitely want to see the impressive stage performance of “The Great Divorce,” currently touring the United States.

This weekend my wife and I journeyed great distances to the city of the Space Needle. (It’s an arduous trek, and involves taking to the seas aboard ferry boats that tourists love and commuters endure.)

Frankly, it requires a lot to move me to subject myself to the teeming masses of traffic and humanity on the streets of urban Seattle—but this performance was more than worth the trip.

“The Great Divorce” has been adapted for the stage by Max McLean and Brian Watkins. McLean is the Founder and Artistic Director of the Fellowship for Performing Arts (FPA) in New York City. You can learn more about the Fellowship and their offerings here.

His last foray into C.S. Lewis’ work was a widely applauded rendition of “The Screwtape Letters.” It was so well received that it may be taken on tour again in upcoming years.

In the current production, three talented actors bring to life a wide range of characters from Lewis’ work about the gulf (“divorce”) between heaven and hell.

Following the performance, McLean offers the audience a short Q&A session on the work. During ours, he was asked if he is contemplating any more Lewisian adaptations. With a broad smile he assured us he was, saying, “I’m smitten by Lewis.”

When asked about the way in which Lewis’ fantasy work was a response to William Blake’s The Marriage of Heaven and Hell, he paraphrased Lewis’ remarks in the preface of The Great Divorce. Then McLean said he wished they had used Lewis’ original title for the work.

In May of 1945 Lewis wrote to a regular correspondent, “The title Who Goes Home? has had to be dropped because someone has used it already. The little book will be called The Great Divorce and will appear about August.” Those acquainted with the volume will recognize how much better suited to the work Lewis’ preferred title was.

So, Where Will the Play Be Performed

Here are the remaining locations for the performances. They are in the midst of their tour, so I will not list places they have already visited. (Don’t wish to disappoint anyone who missed out on an opportunity to see it.)

Everything FPA creates is exceptional. I encourage you to sign up for their email list to keep apprised of their future offerings, including updates to their tour schedule.