I recently had a few free moments while waiting for a flight, and I decided to revisit that enjoyable childhood treasure, Aesop’s Fables. It had been many years since I explored them, and I found the following tale particularly entertaining.

Aesop may have been a fable himself. Aristotle refers to him as an historical figure, but since Aesop supposedly lived three centuries before the philosopher’s day, he had already transformed into a legend.

Plutarch describes Aesop’s death as occurring when he was thrown from a cliff during a failed diplomatic mission. Presumably after insulting the city of Delphi, they accused him of stealing some temple items. (Perhaps he tried to be too witty for his own good.)

Whether he was an actual person or not, the anecdotes that have accreted around his name have entertained countless generations. On now to the story that captured my imagination.

The Kingdom of the Lion

The beasts of the field and forest had a Lion as their king. He was neither wrathful, cruel, nor tyrannical, but just and gentle as a king could be. During his reign he made a royal proclamation for a general assembly of all the birds and beasts, and drew up conditions for a universal league, in which the Wolf and the Lamb, the Panther and the Kid, the Tiger and the Stag, the Dog and the Hare, should live together in perfect peace and amity.

The Hare said, “Oh, how I have longed to see this day, in which the weak shall take their place with impunity by the side of the strong.” And after the Hare said this, he ran for his life.

The Moral: Saying something does not make it so. (Aesop’s Fables).

Although Aesop’s Lion bears a resemblance to C.S. Lewis’ own vision, he is no Aslan. Both are the kings of their respective domains. Both dictate that there be peace among their subjects.

Aslan alone, though, can make this pacific vision reality. And, because sin had entered Narnia, he had to do it by creating a new Narnia. The amazing story of the conclusion of the temporary and inauguration of the eternal is told in The Last Battle. The original plan, recorded in The Magician’s Nephew, was that the creatures live in divine harmony.

The chosen beasts who remained were now utterly silent, all with their eyes fixed intently upon the Lion. The cat-like ones gave an occasional twitch of the tail but otherwise all were still. For the first time that day there was complete silence . . .

The Lion, whose eyes never blinked, stared at the animals as hard as if he was going to burn them up with his mere stare. And gradually a change came over them. The smaller ones— the rabbits, moles, and such-like— grew a good deal larger. The very big ones— you noticed it most with the elephants— grew a little smaller. Many animals sat up on their hind legs. Most put their heads on one side as if they were trying very hard to understand.

The Lion opened his mouth, but no sound came from it; he was breathing out, a long, warm breath; it seemed to sway all the beasts as the wind sways a line of trees. Far overhead from beyond the veil of blue sky which hid them the stars sang again; a pure, cold, difficult music. Then there came a swift flash like fire (but it burnt nobody) either from the sky or from the Lion itself, and every drop of blood tingled in the children’s bodies, and the deepest, wildest voice they had ever heard was saying:

Such love and harmony would not last. Just as in our own world, selfishness and idolatry came to reign. Lewis recognized sin’s corruption cannot be bandaged. It needs to be excised. A broken vessel can be repaired, but it can never regain the purity of its origin without miraculous intervention.

That’s why Christians—who believe in the “resurrection of the (physical) body”—know that these restored bodies will be new.

Just as Aesop’s lion commanded, and Lewis’ Aslan ordained, the Messianic age will one day arrive. And when it does, “The wolf and the lamb shall graze together; the lion shall eat straw like the ox, and dust shall be the serpent’s food” (Isaiah 65:25).

The Moral: When God says something, that does make it so. 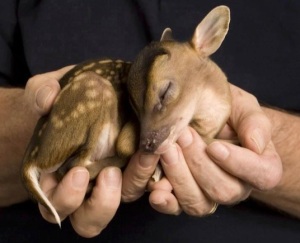 I woke this morning to a scene from Disney.

Looking out the window, with my coffee perking in the background, God blessed me with fabulous scene. A pregnant doe, lying on the ground to rest her weary legs, was peacefully grazing on our lawn. (Echoes of gentle Faline.)

As if that vision were not spectacular enough, a few yards to her side a small bunny hopped about, nibbling on the same grass. (We seeded our lawn with clover to provide a welcoming meal for just such visitors.) The rabbit was alone, although we watched it frolic with its siblings just the other day. (Might they be the children of carefree Thumper?)

Completing the scene were a bevy robins and sparrows. They hopped around the pair, in a wonderful display of original nature’s harmony, which will one day be restored.

The wolf shall dwell with the lamb,

and the leopard shall lie down with the young goat,

and the calf and the lion and the fattened calf together;

and a little child shall lead them.

The cow and the bear shall graze;

their young shall lie down together;

and the lion shall eat straw like the ox.

The Creator of Narnia understood the essence of this peace as well as anyone. C.S. Lewis revealed that just as nature was created at peace, so too the new creation would mark a restoration of that purity. As Lewis writes in Miracles, Nature “is to be redeemed. The ‘vanity’ to
which she was subjected was her disease, not her essence. She will be cured, but cured in character: not tamed (Heaven forbid) . . .”

For the present time, however, we must be content to appreciate brief glimpses of that promise . . . just as I am now, as I write. (Yes, the doe is still resting mere feet from my window.)

Precious moments like this are something to be savored. A sweet foretaste of the feast to come.

The full context of Lewis’ words from Miracles follows. In this passage he warns us not to worship what is created, but only its Creator.

You must have tasted, however briefly, the pure water from beyond the world before you can be distinctly conscious of the hot, salty tang of Nature’s current. To treat her as God, or as Everything, is to lose the whole pith and pleasure of her. Come out, look back, and then you will see . . . this astonishing cataract of bears, babies, and bananas: this immoderate deluge of atoms, orchids, oranges, cancers, canaries, fleas, gases, tornadoes and toads.

How could you ever have thought that this was the ultimate reality? How could you ever have thought that it was merely a stage-set for the moral drama of men and women? She is herself. Offer her neither worship nor contempt. Meet her and know her. If we are immortal, and if she is doomed (as the scientists tell us) to run down and die, we shall miss this half-shy and half-flamboyant creature, this ogress, this hoyden, this incorrigible fairy, this dumb witch.

But the theologians tell us that she, like ourselves, is to be redeemed. The “vanity” to which she was subjected was her disease, not her essence. She will be cured, but cured in character: not tamed (Heaven forbid) nor sterilised. We shall still be able to recognise our old enemy, friend, play-fellow and foster-mother, so perfected as to be not less, but more, herself. And that will be a merry meeting.