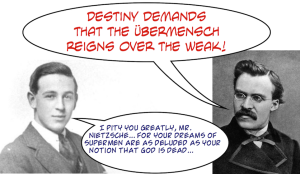 I unexpectedly encountered C.S. Lewis while unpacking a box today.

I’m ashamed to admit it, but five years after moving into our retirement home, I have yet to unpack half of my library.

The text that stood out among the two score volumes restored to the light today is called The Cult of the Superman. It was written in 1944 by Eric Bentley.

The 1969 edition which I possess includes “An Appreciation” by C.S. Lewis. Before emigrating to the United States, Bentley had studied under Lewis at Oxford. He spent his own professorial career at Columbia University.*

I have yet to find the time to read the volume, but it’s subtitle clarifies the profound subject it addresses: A Study of the Idea of Heroism in Carlyle and Nietzsche, With Notes on Other Hero-Worshippers of Modern Times. Thomas Carlyle and Nietzsche, in elevating the exceptionality of the hero or superman who “shapes history,” diminish the value of the vast majority of human beings who seek no such domineering role.

This view, so warmly embraced by the Nazis, is directly opposed to the Christian worldview.

The news that God lifts the lowly will come as a disappointment to any supermen or superwomen who are reading this.

However, to those of us who do not yearn to rule over the masses, it is joyous news. “Blessed are the poor in spirit, for theirs is the kingdom of heaven.”

Nietzsche would revile those words, yet his knee too will one day bow before the One who “emptied himself, by taking the form of a servant, being born in the likeness of men.”

In his “Appreciation,” Lewis declares that Bentley is the right man to address this challenging topic.

The Author, though sternly critical, has a sympathy which I cannot emulate with those elements in Heroic Vitalism which really deserve a serious answer, and this enables him to make a constructive book out of what might easily have become a mere chamber of horrors.

This aggrandizement of those who seize their self-ordained right to lord over others can certainly lead to horrors. One example I recently saw was a violent criminal’s justification for his actions. “There are sheep and there are wolves. I’m a wolf. The sheep only exist for my benefit.”

Those of us who comprise the lambs find it inconceivable that evil people believe we exist only to be preyed upon. Yet, this is precisely what predators think. And this Nietzschean notion can justify any atrocity, based as it is upon the maxim that “might makes right.”

Coincidentally, as I was writing this column, “Fishers of Men” by The Newsboys began playing. The first lyrics in the song coincide perfectly with the biblical promise above that every single person—including you—is precious to God.

And they all mean the world to You.

So much for those who would consider themselves super-men . . .

* Lewis’ praise for Bentley’s work is also found in a letter included as an expression of appreciation in ‪The Play and Its Critic: Essays for Eric Bentley.

For an interesting assessment of Lewis’ influence on Bentley’s vocation as a drama critique, Donald Cunningham writes in his Ph.D. dissertation:

Dissent and debate were seen by Lewis as a method for testing ideas, and so he felt that discussion of an ideological sort could only strengthen a grasp on truth. . . . It is possible, then, that Bentley’s positive attitude toward conflict and its necessary presence in a pluralistic, growth-oriented world was learned at Oxford.

12 responses to C.S. Lewis and Supermen