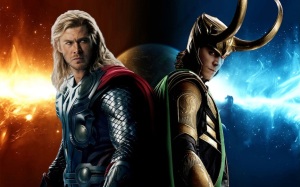 I have a confession to make. One that is particularly awkward for a pastor.

The current success of the recent films about the Norse god of thunder have reminded me of one of the “errors” of my youth.

As a young boy I discovered great delight in reading comic books. And among all of the countless Marvel and DC titles I read during my youth, none was more precious to me than Thor. I never really “worshiped” him, of course, but I was enraptured by his saga.

I loved the comic, and it was difficult to wait each long, long month for the next issue to be published. I followed Thor’s adventures with intense devotion. An intense loyalty that was probably inappropriate since it was directed towards a pagan deity.

To make matters worse, the part of the magazine that appealed most to me was not the contemporary escapades of the otherworldly hero. The feature that most captivated my imagination was a smaller story included in each issue and entitled “Tales of Asgard.”

These stories were terribly brief, only five short pages, and didn’t introduce contemporary terrestrial or interstellar villains. Instead, they recounted the historic tales of Norse myth and religion. Their very earthiness—their historical authenticity—impressed me far more profoundly than did the 1960s superhero fare so commonplace during that era.

In fact, in Thor’s two cinematic blockbusters, I find the same to hold true. I find the mythological elements, the portions of the story set in Asgard far more captivating than the familiar, run of the mill heroic landscape of Midgard (Earth).*

I doubt  I am alone in my appreciation of the mythical over the scientific or magical elements. In the preface to The Pilgrim’s Regress, C.S. Lewis wrote, “When allegory is at its best, it approaches myth, which must be grasped with the imagination, not with the intellect.”

C.S. Lewis wrote a great deal about the power of myth. Like his close friend, J.R.R. Tolkien, author of Lord of the Rings, Lewis brought myth to life in The Chronicles of Narnia. In 1944, Lewis wrote an essay entitled “Myth Became Fact.” In it he explores the notion that in a sense Christianity too, is a myth—with one distinction from all of the rest.

Now as myth transcends thought, Incarnation transcends myth. The heart of Christianity is a myth which is also a fact. The old myth of the Dying God, without ceasing to be myth comes down from the heaven of legend and imagination to the earth of history. It happens—at a particular date, in a particular place, followed by definable historical consequences.

We pass from a Balder or an Osiris, dying nobody knows when or where, to a historical Person crucified (it is all in order) under Pontius Pilate. By becoming fact it does not cease to be myth: that is the miracle.

I began by saying I was making a confession of sorts. In truth, fascination with myth is nothing to be ashamed of. Lewis describes how it was precisely his own interest in such matters that played a primary role in his conversion to Christianity. In a 1931 letter to his friend Arthur Greeves, he describes the incipient process. These words foreshadow the message of the essay referred to above.

The reason was that in Pagan stories I was prepared to feel the myth as profound and suggestive of meanings beyond my grasp even tho’ I could not say in cold prose “what it meant.” Now the story of Christ is simply a true myth: a myth working on us in the same way as the others, but with this tremendous difference that it really happened: and one must be content to accept it in the same way, remembering that it is God’s myth where the others are men’s myths: i.e. the Pagan stories are God expressing Himself through the minds of poets, using such images as He found there, while Christianity is God expressing Himself through what we call “real things.”

Therefore it is true, not in the sense of being a “description” of God (that no finite mind could take in) but in the sense of being the way in which God chooses to (or can) appear to our faculties. The “doctrines” we get out of the true myth are of course less true: they are translations into our concepts and ideas of that which God has already expressed in a language more adequate, namely the actual incarnation, crucifixion, and resurrection.

Does this amount to a belief in Christianity? At any rate I am now certain (a) That this Christian story is to be approached, in a sense, as I approach the other myths. (b) That it is the most important and full of meaning. I am also nearly certain that it really happened.

The awareness that a mind so brilliant (and sanctified) as Lewis’ recognized the value of myth comforts me. I guess, in retrospect, that my youth was not entirely misspent reading those amazing stories. Thor still occupies a special place in my life journey, albeit not in a pantheon.

* There are nine worlds in Norse cosmology. Midgard lies between the noble worlds of Asgard, Vanaheim and Alfheim . . . and Jotunheim, home of the frost giants, Svartalfheim, realm of the Dark Elves, and Muspelheim, abode of the Fire Giants and demons.