Writing During the New Year

A new year is dawning, and the future is yours to write. For writers, these optimistic words possess doubled promise.

Metaphorically, 2021 offers all of us a fresh beginning. We can build on the good aspects of our lives, and abandon behaviors that result in less desirable outcomes. Some people do that in the form of making “new year resolutions.”

The new year offers those who write—a large number of those who actively follow Mere Inkling—a new opportunity to pursue our literary dreams. For example, we can begin scheduling regular times for studying the art, and even (I realize this is shocking) for writing itself!

Certainly, many of life’s experiences remain beyond our control, but how we choose to respond to them is not. And it is not too challenging to imagine that these unpleasant days of social isolation might contribute to inherently personal pursuits such as writing.

While I was working on an upcoming post about “quotations,” I encountered the volume illustrated at the top of this column. It represents the first two pages of A Year Book of Quotations: From the Writings of Henry Wadsworth Longfellow, with spaces for Autographs and Records (New York: 1896).

Look not mournfully into the Past. It comes not back again. Wisely improve the Present. It is thine. Go forth to meet the shadowy Future without fear, and with a manly* heart. (Hyperion).

These pages commended themselves to me as an ideal exemplar of the point I am attempting to make. New Year’s Day is an ideal time to begin new writing practices. While the hobby of collecting “autographs” may have declined through the years, the value of keeping written “records” has not.

The very structure of this journal invites a reader to preserve their unique insights. And, while the space in the book itself is limited, the blank lines serve to remind us that a few minutes devoted to the keyboard or pen each day can be worthwhile.

The epic poetry of Longfellow (1807-1882) was highly regarded during his lifetime. Following the death of his second wife, he wrote less poetry and focused on translating foreign authors into English.

In a 1915 letter to his father, Lewis commented on Rudyard Kipling’s militant promotion of the First World War. As he concluded his thoughts on the subject, he wrote, “I conceive that Kipling is one of those writers who has the misfortune in common with Longfellow, of always being known and liked for his worst works.”

There is one poem in Longfellow’s works—a piece inspired by his translation of a Swedish poet—that greatly impacted a very young C.S. Lewis. In “Tegner’s drapa,” Lewis encountered the essence of “Northernness” which would fuel his imagination the remainder of his life.

The entire poem is available here, but it was the ode’s opening that sparked the flame.⁑ Lewis describes the incident in his autobiography, Surprised by Joy.

It will be clear that at this time—at the age of six, seven, and eight—I was living almost entirely in my imagination; or at least that the imaginative experience of those years now seems to me more important than anything else. . . . I had become fond of Longfellow’s Saga of King Olaf: fond of it in a casual, shallow way for its story and its vigorous rhythms.

But then, and quite different from such pleasures, and like a voice from far more distant regions, there came a moment when I idly turned the pages of the book and found the unrhymed translation of “Tegner’s Drapa” and read,

I heard a voice that cried,
Balder the beautiful
Is dead, is dead.

I knew nothing about Balder; but instantly I was uplifted into huge regions of northern sky, I desired with almost sickening intensity something never to be described (except that it is cold, spacious, severe, pale, and remote) and then, as in the other examples, found myself at the very same moment already falling out of that desire and wishing I were back in it.

In 1927, Lewis penned a lengthy letter to his brother, which included an entertaining discussion of American authors. He highlights the nationalistic bragging to which many Americans succumb. He encourages Warnie to recall the days when the two of them boasted about the accomplishments of Northern Ireland.

If you cast back your mind, when we were at Wynyard we were in exactly that phase: it gave us a pleasure at which I still blush to din into people’s ears the fact that Belfast had the largest gantry in the British isles or had launched the largest ship afloat.

But we have outgrown it: it would now give me no appreciable thrill to convince the fellows of Magdalen that my father was the largest batata⁂ in Europe. If the analogy between peoples and individuals were sound, I suppose we should have to forgive the Americans for being in a state which we once passed through ourselves.

After discussing several others, Lewis confesses, “Hawthorne I admire beyond words: and ‘I have a sneaking affection’ for Longfellow.”

In retrospect, all of us who appreciate the writer C.S. Lewis became, owe a profound debt to Henry Wadsworth Longfellow.

And, if Longfellow’s collection of quotations—with spaces for Autographs and Records—encourages any of us to renew our commitment to becoming better writers, we have another good reason to be grateful.﻿

* Yes, the pronouns are a bit dated, but we all know what Longfellow meant.

⁑ You can find direct inspiration for Longfellow’s poem in his translation of the poetry of Esaias Tegnér (1782-1846).

⁂ In case you are like me, and didn’t know, a batata is a sweet potato. It may also have been used as slang for Irish people, referring to being potato eaters. One can just imagine the two young men touting such a grand accomplishment by their father. (If anyone knows the precise meaning Lewis intended for the word, please let us know!)

One of the common frustrations online writers face is the question: “is anyone out there reading what I write?”

I suspect that’s been the plaintive lament of all authors, since the dawn of written languages. Just as a conversation can’t occur when one of the parties ignores the other, no “communication” takes place when something is written, but never read.

Blogs provide an excellent framework for exploring this phenomenon. Bloggers don’t write merely for themselves. (If they wanted to do that, they’d simply “journal.”) Bloggers long to have others read their words. And the commonest disappointment of new online writers is just how few people actually visit their sites.

Fortunately, communities such as wordpress include features that allow us to track statistics in an accurate manner. Even when visitors fail to comment or formally “like” a post, they still leave digital footprints. I’ve written before about how enjoyable it is to see how frequently your page has been visited by people from all around the world.

At that time I shared my statistical world map, (directly below). Today I follow it with my current status . . . which reveals that I have finally penetrated the Great Wall and accessed the vast population of the People’s Republic of China! (Of course, I have long suspected the Chinese military of spying on my column, in an effort to glean military secrets about the Inklings’ military service during WWI.) 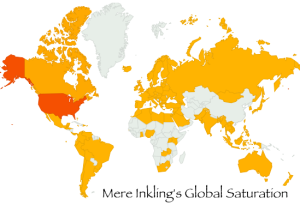 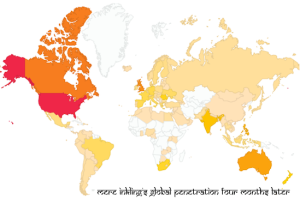 Methods of Increasing Visits to Our Sites

There are a number of concrete ways to expose others to our words. A few appear below. Still, it’s good to remain realistic in our expectations.

I recently read that it’s worthwhile being listed in the Technorati blog directories. As part of the verification process for inclusion there, I need to include in one of my blogs the code RFQE8T2R48RG. (I just hope their verification search engine isn’t confused by the numerous occasions when I’ve used that very same code in my previous blogs.)

As promised, here are a handful of nearly universal recommendations for increasing the number of visitors to our websites.

Truly sorry about that last plug. I’m simply trying extra hard to ensure my words don’t drop into the obsidian darkness of digital anonymity. Blessings in your own efforts to ensure the same!