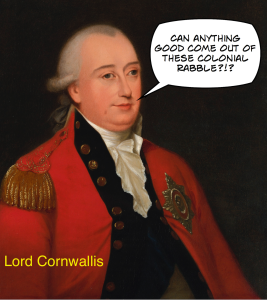 Everyone loves a compliment. Allow me to rephrase that. Most people appreciate a sincere compliment when it is genuinely flattering.

So let’s return to the concept of “compliments” in general. Most, we know, are welcome. It’s nice to have someone tell us we did a commendable job or had a good idea.

This type of statement might sound on its surface like a compliment, but includes an element that undermines the praise. The Urban Dictionary offers the following example:

Now, that is nothing but an insult. And it’s an insult of the crassest variety. One that demands no wit at all.

The British, on the other hand, are often capable of offering highly refined backhanded compliments.

I just came across a delightful one, delivered by the commander of the King’s forces during America’s War of Independence. What makes this exquisite is that it was offered in the wake of the general’s defeat at the close of the war.

When finally brought to heel at Yorktown, Lord Cornwallis reported, “I will not say much in praise of the Militia of the Southern Colonies, but the list of British officers and Soldiers killed or wounded by them since last June, proves but too fatally that they are not wholly contemptible.”

You can read more about the context for that statement in an excellent article about the American legacy of “citizen soldiers” published in Hallowed Ground magazine. This excellent journal is published by the Civil War Trust, which works diligently to preserve battlefields from the Civil War. They have recently expanded those efforts to include the Revolutionary War.

Lewis included backhanded compliments in his fictional works. Two simple examples follow. The first is found in The Screwtape Letters, where the tempter frequently commends the skill of God (“the Enemy”) in redeeming the lost.

Never forget that when we are dealing with any pleasure in its healthy and normal and satisfying form, we are, in a sense, on the Enemy’s ground. I know we have won many a soul through pleasure. All the same, it is His invention, not ours.

Here is an offhanded compliment that Lewis places on the lips of Prince Corin in The Chronicles of Narnia. He is asked where Queen Susan is, on the eve of a battle and he responds like a typical young boy (which he still is at the time). He praises the martial spirit of her sister, Queen Lucy, who is a young adult at this point in the series.

At Cair Paravel. She’s not like Lucy [her sister who is in the ranks of the archers], you know, who’s as good as a man, or at any rate as good as a boy. Queen Susan is more like an ordinary grown-up lady. She doesn’t ride to wars, though she is an excellent archer. (The Horse and His Boy).

The late Bruce Edwards described how C.S. Lewis offered H.G. Wells a backhanded compliment. He did so by following the structure of Wells’ works, but devoting them to a vastly different philosophical purpose.

In Out of the Silent Planet (1938), Lewis adapted the general plot outline from H.G. Wells’s First Men in the Moon in order to tell an essentially anti-Wellsian tale. In Perelandra, Lewis pays a similar backhanded compliment to the man he admired as a speculative writer, but not as a philosopher.

The broad narrative structure of Perelandra resembles another novel by H.G. Wells, The Time Machine (1895). . . . In Wells’s novel, this narrative outline provides the basis of a quasi-Marxist fable about effete bourgeoisie and surly proletariat. In Lewis’s hands, a similar story structure tells a very different tale, one in which the ultimate battles are not economic and political, but rather cosmic and spiritual. (C.S. Lewis: Fantasist, Mythmaker, and Poet).

Compliments: the Good & the Bad

Lewis’ use of Wells’ science fiction template was not meant to slight him. It was actually a tribute. Likewise, in the examples from his fiction, Lewis is simply representing (effectively) the attitudes of the speakers.

Returning for a moment to the abject General Cornwall, we recognize as well the grudging nature of his praise of the enemy. They were certainly rabble—possessing no great military skill, in his estimation. Yet, in terms of bringing the army of the greatest power in the world at that time to its surrender, “they are not wholly contemptible.”

And that, when it came to winning the war, apparently proved quite sufficient.

6 responses to Not Wholly Contemptible