Pacifism as an Enemy of Peace 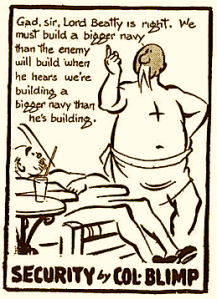 The literary careers of C.S. Lewis and George Orwell overlapped in some interesting ways.* Today we will consider a rather odd British personality mentioned by each of them in wartime essays, Colonel Blimp.

Colonel Blimp was a cartoon figure, inspired by a conversation between two military officers who were arguing that “cavalry” officers should continue to wear spurs even when they migrated into tanks.**

At one time the cartoon was so popular that Lewis wrote:

It may well be that the future historian, asked to point to the most characteristic expression of the English temper in the period between the two wars, will reply without hesitation, “Colonel Blimp.” (“Blimpophobia”).

The good colonel echoes similar foolish notions as he blusters about in a caricature of pompous military commanders. Blimp is retired, but harangues all within earshot about the wisest course for the nation.

Orwell wrote derisively of the military and imperialistic middle class, that he called “the Blimps.” He drew the label from the “colonel with his bull neck and diminutive brain, like a dinosaur.” (“The Lion and the Unicorn”).*** 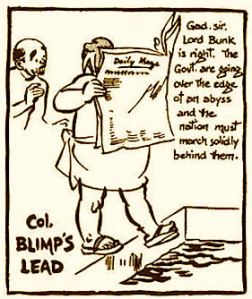 The cartoon above illustrates how Colonel Blimp is certain he has the solution to winning the arms race. The frame to the right shows that he believes his wisdom extends beyond the military to politics in general.

In “Blimpophobia,” Lewis offers advice which proves apropos for our modern age. Today, as fanatical barbarians seek to destroy civilization, enlightened nations and individuals must be vigilant.

One dimension of that vigilance involves walking the fine line between unbridled nationalism and self-absorbed pacifism. When he wrote, Lewis was worried about the anti-war sentiment that threatened to undermine Britain’s response to the Nazis.

Lewis, a wounded combat veteran of the Great War, recognized the truth of the Colonel Blimp caricature. He said something veterans recognize even more clearly than civilians. There is an overabundance of preening and stupidity in the military.

The infection of a whole people with Blimpophobia would have been impossible but for one fact—the fact that seven out of every ten men who served in the last war, emerged from it hating the regular army much more than they hated the Germans. How mild and intermittent was our dislike of “Jerry” compared with our settled detestation of the Brass Hat, the Adjutant, the Sergeant-Major, the regular Sister, and the hospital Matron!

Now that I know more (both about hatred and about the army) I look back with horror on my own state of mind at the moment when I was demobilized. I am afraid I regarded a Brass Hat and a Military Policeman as creatures quite outside the human family.

Still, he said we cannot allow that sad truth to cause us to deny the requirement to maintain a strong defense. “A nation convulsed with Blimpophobia will refuse to take necessary precautions and will therefore encourage her enemies to attack her.”

C.S. Lewis warned his countrymen of the dangers military-phobia during the Second World War. And—among the war-weary nations of the free world battling jihadism—we are wise to heed his wise words today.

The future of civilization depends on the answer to the question, “Can a democracy be persuaded to remain armed in peacetime?” If the answer to that question is No, then democracy will be destroyed in the end. But “to remain armed” here means “to remain effectively armed”. A strong navy, a strong air force, and a reasonable army are the essentials. If they cannot be had without conscription, then conscription must be endured. (C.S. Lewis, “Blimpophobia”).

* In “A Literary Phobia,” I compared some advice they offered to writers. The counsel in question sounds similar on the surface, but actually differs. In “Orwellian Advice,” I contrast the two authors in much greater detail.

** Blimp’s creator, David Low, resided in London but was actually a New Zealander.

8 responses to Pacifism as an Enemy of Peace