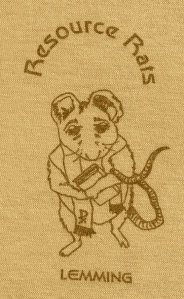 The closest camaraderie I ever experienced in my life, was on the staff of the USAF Chaplain School. A sign of our esprit de corps was seen in the nicknames we gave one another. Mine was Lemming. (Not too dashing, I know, but read on and you’ll see why it was bestowed with affection and respect.)

Those of us who worked on “Air Staff” projects (for the Chief of Chaplains) were in the Resource Division. Probably because we were always rushing (scurrying?) around responding to emergencies, the other chaplains called us the “Resource Rats.” We were close indeed, and our energies and creativity was magnified by our synergy . . . just like the Inklings.

We embraced the label, and before we knew it each of us had been identified as a particular member of the rodent family. We had a rabbit, hamster, beaver, squirrel and fudged a bit with a ferret and a weasel. Among assorted other “rats,” I was nicknamed—you didn’t choose your identity, your friends awarded it to you—Lemming.

They called me Lemming because I had a unique duty on the team. One of my duties was to do a little bit of “ghostwriting” for the Chief of Chaplains. Some would consider it an honor, but trust me, due to the general for whom I wrote the first year, it was anything but.

Why a Lemming? Well, because whenever a tasking came down I would dutifully march off in obedience . . . even if it meant marching right off of a cliff. Like the humble Lemming, I accepted my fate, and made the best of it.

We all know their tragic story. When the Lemming burrows become overcrowded, a large number of them will sacrificially gather together and march to the sea. There, those who did not perish in catastrophic falls, nobly swim out to sea so that their relatives back in the warren can once again devote themselves to overpopulating their habitat.

I was proud of the appellation. I wore the name (literally, on the shirt logo pictured above) as a badge of honor. Until . . . until I discovered it was all based on a lie.

Lemmings, we have learned, do not suffer from periodic mass suicidal impulses. The common myth is based on an insidious 1958 “nature film” made by Disney. I have no idea why they would compromise their flawless reputation for scientific accuracy in their naturalist media, but in White Wilderness, they cast all integrity aside. (And now I know why C.S. Lewis and J.R.R. Tolkien were wary of the machinations and shadowy motives of Walt Disney Studios.)

With utter disregard to the reputation of these clever arctic creatures, the film showed (supposed) members of the Scandinavian clans eagerly casting themselves to their deaths. However, their bizarre behavior was manipulated by cinematic chicanery.

It turns out that not only did Disney pull the lemmings out of their normal habitat for filming—since they were too intelligent to voluntarily leap to their death, they were thrown off of the cliff from a modified turntable! Ghastly.

Learning that lemmings will not march knowingly (and stupidly) to their own demise has actually made me a bit prouder to bear the title. I mean, it’s one thing as a member of the armed forces to risk your life in the defense of your nation. It’s quite another to commit suicide because a general thought one of your commas was in the wrong place. But that’s a story for another day.