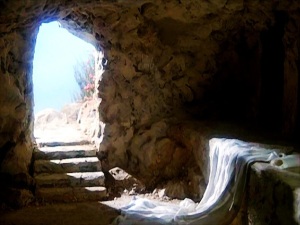 One of the readings at our celebration of the Resurrection, this Easter morning, came from the Gospel according to Saint Luke. It included the powerful words of the angels waiting beside the empty tomb. To Mary Magdalene and the other women who had arrived to complete the ceremonial preparations for Jesus’ burial, they said: “Why do you seek the living among the dead?”

That’s precisely what separates Christianity from every other religious faith; for two millennia, Jesus’ disciples have followed a resurrected and living Lord.

This is what non-Christians are ultimately unable to fathom. Christianity is far more than the adoption of a particular lifestyle. It is infinitely more than a cognitive acquiescence a set of doctrines. It is nothing less than a dynamic, living relationship with our Creator through his only begotten Son.

Many regard Jesus as a great teacher from an ancient epoch—whose words are worthy of preserving. This is a good thing . . . but it’s not Christianity.

Many consider Jesus the model of a noble life—and strive to emulate his compassion and humility. This too is a good thing . . . but it’s not Christianity.

Many regard Jesus as an object of superstition—and they spout religious jargon while living hypocritical lives utterly devoted to their carnal appetites. This is not a good thing . . . and it’s most certainly not Christianity.

C.S. Lewis refers to this inherent inability to “persuade” an unbeliever to see beyond Christianity as a creedal profession or even a simple lifestyle and comprehend it as a relationship.

Our opponents, then, have a perfect right to dispute with us about the grounds of our original assent. But they must not accuse us of sheer insanity if, after the assent has been given, our adherence to it is no longer proportioned to every fluctuation of the apparent evidence. They cannot of course be expected to know on what assurance feeds, and how it revives and is always rising from its ashes.

They cannot be expected to see how the quality of the object which we think we are beginning to know by acquaintance drives us to the view that if this were a delusion then we should have to say that the universe had produced no real thing of comparable value and that all explanations of the delusion seemed somehow less important than the thing explained.

That is knowledge we cannot communicate. But they can see how the assent, of necessity, moves us from the logic of speculative thought into what might perhaps be called the logic of personal relations. What would, up till then, have been variations simply of opinion become variations of conduct by a person to a Person. Credere Deum esse turns into Credere in Deum. And Deum here is this God, the increasingly knowable Lord. (C.S. Lewis, “On Obstinacy in Belief”).

Ultimately, inviting others to share the joy and peace that we disciples of Jesus know—undeserving as all of us are—is not about persuasion. It is about introducing them to Jesus.

It’s about echoing the words of the angels in that Judean cemetery. “Don’t seek Jesus among the dead. He is risen and living, and he offers eternal life to all who call upon his name.”

9 responses to Seeking the Living