Socialism is in the news, and we need not wonder what the prolific and wise C.S. Lewis would have thought about it.

In the United States, for example, one of the serious contenders for the presidential election this fall belonged to neither the Democrat nor Republican parties.

Bernie Sanders dropped the “D” descriptor he had, for political convenience, worn for several months. He did so soon after Hillary clinched the Democrat nomination, saying he was elected as an “Independent,” and would return to the Senate as one.

Elsewhere in the world we see one of the most recent experiments in socialism following the historic pattern. Venezuela has fallen from the ranks of successful nation states into the abyss of socialist turmoil.

Even liberal (progressive) voices are acknowledging the abject failure of socialism in a formerly comfortable country.

When a Venezuelan entrepreneur we know launched a manufacturing company in western Venezuela two decades ago, he never imagined he’d one day find himself facing jail time over the toilet paper in the factory’s restrooms. But Venezuela has a way of turning yesterday’s unimaginable into today’s normal.

The entrepreneur’s ordeal started about a year ago, when the factory union began to insist on enforcing an obscure clause in its collective-bargaining agreement requiring the factory’s restrooms to be stocked with toilet paper at all times. The problem was that, amid deepening shortages of virtually all basic products (from rice and milk to deodorant and condoms) finding even one roll of toilet paper was nearly impossible in Venezuela—let alone finding enough for hundreds of workers. When the entrepreneur did manage to find some TP, his workers, understandably, took it home: It was just as hard for them to find it as it was for him.

Toilet-paper theft may sound like a farce, but it’s a serious matter for the entrepreneur: Failing to stock the restrooms puts him in violation of his agreement with the union, and that puts his factory at risk of a prolonged strike, which in turn could lead to its being seized by the socialist government under the increasingly unpopular President Nicolas Maduro.

So the entrepreneur turned to the black market, where he found an apparent solution: a supplier able to deliver, all at once, enough TP to last a few months. (We’re not naming the entrepreneur lest the government retaliate against him.) The price was steep but he had no other option—his company was at risk.

But the problem wasn’t solved.

No sooner had the TP delivery reached the factory than the secret police swept in. Seizing the toilet paper, they claimed they had busted a major hoarding operation, part of a U.S.-backed “economic war” the Maduro government holds responsible for creating Venezuela’s shortages in the first place. The entrepreneur and three of his top managers faced criminal prosecution and possible jail time.

Yes, it “may sound like a farce,” but thinkers like C.S. Lewis have recognized all along that socialism doesn’t work.

Europe took years to recover from the ravages of World War II. One consequence, common to many nations throughout the world during the war, was severe rationing.

The war’s end signaled a swift return to normal life in the United States and Canada. Meanwhile, in places like the United Kingdom, rationing continued, and some products (notably potatoes) were added to the list.

It’s in this context that we read the following letter that Lewis penned to one of his American correspondents. Vera Gebbert and her husband were among the Americans who occasionally forwarded food gifts which Lewis generously shared with others.

In 1954 he thanks her for her generosity and acknowledges the welcome end of rationing. In the same letter he offers a humorous political aside—at the expense of socialism.

Dear Mrs. Gebbert, Many thanks for your nice letter of the 15th, though it would have given both of us more pleasure if your account of your own state had been better: which I hope it now is.*

And I’m so glad that the Horse helped to see you through an illness, which I trust is now a thing of the past. My brother thanks you too for all the kind things you say of the Century,** and says he hopes to have another book out either late this year or early next, of which you shall have a copy.

I’m afraid it would be sheer dishonesty to pretend that we now have any kitchen needs; this government has done a magnificent job in getting us on our feet again, and a few weeks back, we solemnly burnt our Ration Books. Everything is now ‘off ration,’ and though at first of course, prices went up with a rush, they are now dropping.

But cheer up, if our friends the Socialists get back into power, you will be able to exercise your unfailing kindness once more by supplying us, not with little luxuries, but with the necessities of life!

‘How is Cambridge?’ Well, so to speak, it isn’t; in other words, I have not yet begun my Cambridge career. And when I do, the break will not be so big as you might imagine; for I shall be non-resident. Cambridge will be content with my presence there from Tuesdays to Saturdays in term time, so I shall be able to keep on the house at Oxford and become what I think you call a ‘commutor’ don’t you? Our sister college, Magdalene, has been good enough to give me a set of rooms, so I shall be very snug during the week.

The subject addressed above is not simply about toiletry scarcities or the eccentricities of antediluvian politicians. It dramatically affects the lives of real people.

Our thoughts and prayers should be offered on behalf of the victims of socialism. Just as we should recognize that unbridled capitalism does not nurture a paradise, either. However, it is unfathomable to imagine a contemporary democracy (based on capitalism) imposing serfdom on its citizens, as Venezuela is now doing.

So, it seems Lewis was correct about the propensity of socialism to undermine order and dishevel systems of proven success. After all, those supermarket shelves were not always empty before the Chaveznistas took over.

* Gebbert had shared with Lewis about her domestic problems which were culminating in an imminent divorce.

** The Splendid Century: Life in the France of Louis XIV, was a well-received study Warnie had written. 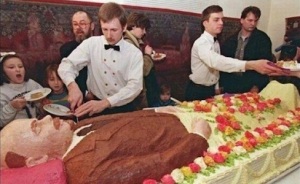 Today’s news carried a truly bizarre story. Yesterday, Venezuela’s dictator died after a lengthy illness. Today we learned that his body is due to be preserved for future generations to venerate. Like his forebear Lenin, he’ll be on call in a glass casket in case someone needs to gaze at him to have their socialist energies reinvigorated.

And that was only half of the surprising news report about Chavez’s demise.

The head of the presidential guard, a general close to the leader, related his final words. He was at his bedside and reported that he was too weak to verbalize the words, but clearly mouthed the plea “I don’t want to die; please don’t let me die.”

It’s shocking that General Ornella would divulge this fact about Chavez, particularly during the actual process of his divinization. The general attributes Chavez’s reluctance to receive his “eternal reward” to his love of country and desire to remain here to lead his nation for ever.

I, on the other hand, would attribute his reluctance to die to other sentiments.

The article that related the morbid plans for the display of Chavez’s body cited the familiar example of Lenin, which I mentioned above. It also noted two other former rulers whose bodies have also been preserved for an adoring posterity: Mao Zedong and Ho Chi Minh. Preparing this post I found that Kim Il-sun and his son Kim Jong-Il share a mausoleum. Likewise, Lenin’s successor Stalin would still be on display, had it not been for eventually falling out of political favor.

Now, there’s something obvious that all of these men have in common. They were leaders of oppressive communist regimes—which oppressed their own citizens because of their atheistic worldview.

Having rejected God and knowing no hope of resurrection or eternal life, they feebly grasped for immortality the only way they knew. They sought to leave a monumental mark on history, in order to be long remembered. And, considering a monument and a statue insufficient mnemonic devices . . . well, enough about that.

We who know the Creator of all life have much to be grateful for. Not least of which, his gracious gift of eternal life. Christians believe we will trade in this weak and worn body for a new one. So, while we treat the bodies of those who have died with dignity, we feel absolutely no impulse to venerate them. On the contrary, “ashes to ashes and dust to dust.”

C.S. Lewis wrote something in Mere Christianity which relates directly to this sharp contrast in worldviews.

That, dear friends, is quite a paradigm shift. To regard each human life as more precious than any abstract government or institution created by humanity’s hand. Having that perspective is akin to seeing with God’s own eyes.

I hope the people of Venezuela soon recognize the futility of the shrine that is being built. Infinitely better to seek “immortality” (eternal life) in the one place where it may truly be found.