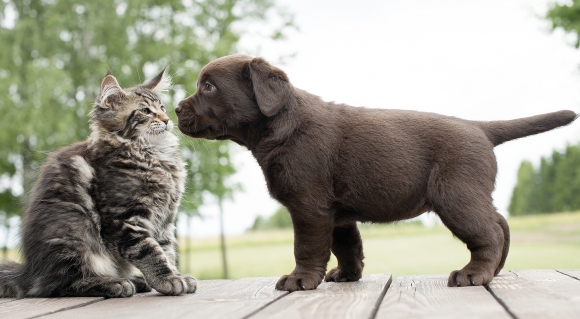 Cats or dogs? Which makes the best companion? This is one of the few topics guaranteed to arouse arguments as intense as political debates.

The fact is, the first three words already elicited a visceral reaction from most readers. “Cats or dogs” might as well read “cats versus dogs.”

Even though many of our homes welcome both species as residents, we all know they are drastically different. Many dogs eagerly solicit feline playful attention, while most cats choose to remain aloof from them, barely tolerating their canine presence.

The humans who share the habitation may genuinely loves both types of animals, but in the deep recesses of their hearts everyone possesses a (sometimes secret) preference for one or the other.

C.S. Lewis was an animal lover. He had both dogs and cats during his lifetime. And he recognized well their differences. In a 1955 letter to an American correspondent, he wrote:

We were talking about Cats & Dogs the other day & decided that both have consciences but the dog, being an honest, humble person, always has a bad one, but the Cat is a Pharisee and always has a good one. When he sits and stares you out of countenance he is thanking God that he is not as these dogs, or these humans, or even as these other Cats!

I love Lewis’ comparison of their temperaments. I don’t think I’ve ever met a cat who was not at least a little bit self-righteous. As for canines . . . even disobedient rascals (like our yet-to-be-sufficiently-trained adolescent border collie) are quite aware of the fact that they are being “bad.” Some are even grow remorseful.

In a 1961 missive Lewis addresses the psychoanalysis of a cat. He is responding to a correspondent’s announcement that her veterinarian had diagnosed her cat with some behavioral problem.

I hope your vet is not a charlatan? Psychological diagnoses even about human patients seem to me pretty phoney. They must be even phonier when applied to animals.

You can’t put a cat on a couch and make it tell you its dreams or produce words by ‘free association’. Also—I have a great respect for cats—they are very shrewd people and would probably see through the analyst a good deal better than he’d see through them.

Lewis is quite likely correct in this observation. Our cats obviously see through all of their human “family.” They are not only astute, they act disinterested, but actively observe us all day long. (Well, at least during the ninety-four minutes when they are not napping each day.)

I have written about C.S. Lewis’ dogs in the past. I’ll close now with a passing reference Lewis made in a 1962 letter to a fellow cat-lover.

We [you and I] are also both ruled by cats. Joy’s Siamese—my ‘step-cat’ as I call her—is the most terribly conversational animal I ever knew. She talks all the time and wants doors and windows to be opened for her 1000 times an hour.

So it goes with our pharisaical felines. With majestic posture, they patiently wait for us to fulfill their commands.