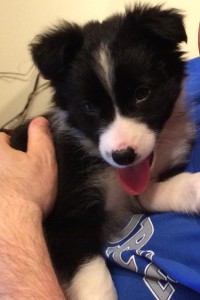 I recently described Henri III’s torture of puppies during his reign. The clown actually wore them, as an adornment!

In that same column, I mentioned that we were adopting a new puppy . . . and she has arrived in our home!

Getting a puppy marks a departure from our normal pattern. Our last three border collies (including the mature lady who still graces our manse) were all “rescues.”

However, we did not feel that Foxy was up to adjusting to another mature dog, since she lost Lyric last winter and her other (long-lived) sister, Tanner.

In my post about Henri III, I shared comments from two letters that C.S. Lewis wrote a century ago to one of his closest friends. Arthur Greeves had gotten a puppy, and Lewis reminded him of the responsibilities of the human member of that relationship.

Lewis wrote that it was cruel, “Unless you are a person with plenty of spare time and real knowledge, it is a mistake to keep dogs . . .”

In a subsequent letter, Lewis advised Greeves on how to choose a name for his puppy.

How’s the poor, miserable, ill-fated, star-crossed, hapless, lonely, neglected, misunderstood puppy getting along? What are you going to call him, or rather, to speak properly, how hight he? Don’t give him any commonplace name, and above all let it suit his character & appearance. Something like Sigurd, Pelleas or Mars if he is brisk and warlike, or Mime, Bickernocker or Knutt if he is ugly and quaint.

We had already chosen the name for our puppy before I found this quotation. But I think Lewis would have approved.

We named our new little girl after one of the Greek Muses, who inspired literature and the arts. Her name is Calli.

If you’re knowledgeable in mythological matters, you will recognize that it’s our nickname for Calliope, the Muse of epic poetry.

Being more of a historian than a poet, I wanted to use the name Clio, who is the Muse of History. Calli fits her better though.

Calliope is a wonderful, musical name though, since she was the chief Muse, and her name literally means “beautiful-voiced.” What a lovely name. I hope Calli learns to sing, like our first border collie, Lady. Lady would accompany my wife as she played the piano. It was quite entertaining.

If you have read this far, you too are likely a pet lover. If you have a dog, cat, rabbit, lemur or whatever, of your own, may the Lord bless it with a long and healthy life . . . just as we pray for our own little Calli.

12 responses to Adopting a Puppy