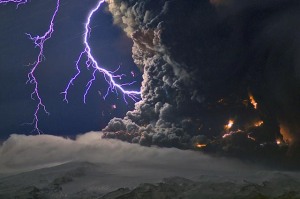 Volcano hurricane. An epic disaster film! No sharks, but copious amounts of lava flung by gale force winds across the globe. And all from the mind of a six year old boy.

Imaginations are great. They are one of the most precious gifts of God (which makes it all the more tragic when the human imagination is diverted towards carnal ends).

The minds of young boys, thankfully, have yet to turn to such lamentable matters. Their innocence shields them from the worst of human corruption. They, instead, are consumed with thoughts of spiders and other things that creep out girls . . . and especially their moms.

Our almost-seven-year-old grandson was here for the weekend with his family. We had a wonderful time. We had actually found the ideal book to include as part of his birthday celebration: How to Convince Your Parents You Can Care for a Pet Tarantula. Perfect.

Young male imaginations seem to revolve around things that shock—and also things that gross others out.

Our kids have trained their own children well. For example, they always excuse themselves when they experience flatulence. It’s a natural experience, of course, and as we mature, adults learn to ignore potentially embarrassing moments related to it. That’s part of becoming “civilized.”

Six year olds . . . not so much. Our grandson properly excuses himself, but he typically does so in the midst of enthusiastic laughter. It’s as though he relishes just how uncultured the moment seems.

During this particular visit, he leaped into my lap in a semi-ninja attack. As we wrestled, there was a minor explosion. Not quite volcanic, but close enough. He apologized, amidst great hilarity. “Sorry about my little gas,” he added.

And here’s where I made the mistake. I reinforced his innate boyhood grossness by saying, “little! . . . that sounded like it was a buffalo!”

Not quite the right thing to say, since it simply encouraged the precocious guy. But what I can say . . . time may change a boy into a man, but in most of us . . . somewhere deep in the recesses of our psyches . . . that boyhood irreverence lingers.

Not that I enjoy the crass “body humor” that pervades so much comedy (on tv and film). I steadfastly avoid it. It insults my mind and viewing it constitutes a total waste of time. Still, with my grandson wrapped in my arms, laughing away, it all seemed so genuine and innocently funny.

Of course, I recognize one needed to be there—and probably to also be related by bloodline to the participants—to find any humor in the moment. But it certainly seemed funny to us.

I was thinking about that moment as I sat down to write this post. I intended to focus on the amazing imaginations of children, and my grandson’s current preoccupation with gigantic volcanoes.

But whim or muse redirected the column. In the end, it turns out to be a reflection on the simple pleasure that we adults experience when we interact with kids. Especially when they are children who are precious to us.

I wish that C.S. Lewis had been able to experience that joy. He wasn’t. His awkwardness with children is well known. Most attribute it to the early passing of his mother, and the emotional distance his father maintained from his sons.

In a 1935 letter he wrote to a close friend, “I theoretically hold that one ought to like children, but am shy with them in practice.”

In The Abolition of Man he was even more forthcoming, sharing that, “I myself do not enjoy the society of small children: . . . I recognize this as a defect in myself.”

So, Lewis recognized his discomfort with children as a shortcoming. It was something he wished could be dispelled. Unfortunately, we can’t simply wish (or pray) away our ingrained personality traits. We’re lucky if we can tame them or reshape them.

We work hard to strengthen our positive traits and the wise deny nourishment to their weaker qualities. People often use the analogy of wearing off one’s rough edges, and that’s an apt image.

Lewis’ reticence with children makes his creation of Narnia all the more wondrous. The Chronicles of Narnia have captivated the hearts and imaginations of innumerable children, and adults alike. Certainly Lewis was correct when he wrote the following in “On Stories.”

With his marriage, late in life, Lewis became a step-father. He did the very best he could, but was conscious of just how ill-equipped he was to raise Douglas and David. Both became successful men. Doug shares his parents’ love of Christ, and helps direct the course of various Lewisian projects today.

Allow me to close with another evidence of the greatness of C.S. Lewis. He was able to rise far above his innate uneasiness with children. In fact, his fabled correspondence included many children who had written to him seeking his attention. In 1951 he wrote to one of them, saying:

I am glad you all liked The Lion. A number of mothers, and still more, schoolmistresses, have decided that it is likely to frighten children, so it is not selling very well. But the real children like it, and I am astonished how some very young ones seem to understand it. I think it frightens some adults, but v[ery] few children.

Lewis did not disappoint the many children who wrote to him during those terribly busy years. Nor do his writings disappoint us today. Unlike the transience of youthful volcano hurricanes, Lewis’ legacy will forever remain alive in the imaginations of child and adult alike.