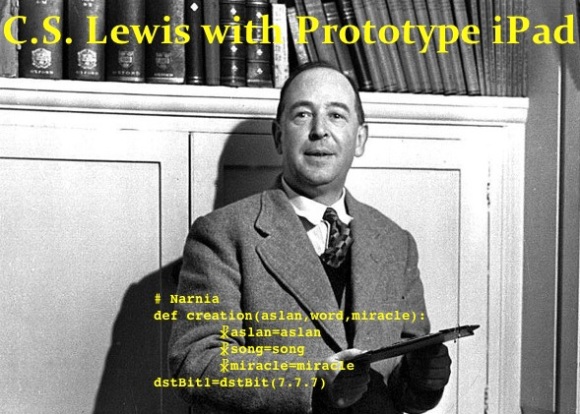 The word “Geeks,” we know, is no longer an insult. It often refers to those über-intelligent folks who author the invisible “codes” that make computer software work.

Their mystical incantations make the modern world go round.

It’s an intriguing genre, but the examples I’ve read suggest that you need to have at least an elementary understanding of programming languages to truly appreciate the poems. Consider “Dailygrind.”

As I understand it, the code needs to (1) be functional (i.e. it has to actually work on a computer), and to (2) possess a lyrical essence.

Boasting no programming skills, I find it rather confusing. Then again, I’ve been confused by other examples of atypical poetry. I guess I’m a poor judge on the matter.

C.S. Lewis, on the other hand, was an expert on nearly all things literary. Although he died before the development of the internet, I would be curious to see how he would measure this novel approach to verse.

Although he was little praised for his poetic forays, Lewis penned a number of poems. Some are sprinkled throughout his writings, and others were compiled after his passing by Walter Hooper. The collection Poems is quite enjoyable. And Hooper’s preface to the collection is very informative.

He relates a delightful example of Lewis’ poetic admission that he found a particular poetic image particularly inappropriate.

The fact that he did not publish these poems during his lifetime suggests that Lewis was hesitant about their publication. He knew his poems were very unlike most contemporary verse. Because of this, he could not be certain of the reaction of his readers. The answer is not far to seek. In the poem, “A Confession,” Lewis says with ironical disappointment:

I am so coarse, the things the poets see

Are obstinately invisible to me.

A patient etherized upon a table;

In vain. I simply wasn’t able.

Lewis found Mr Eliot’s comparison of an evening to a patient on an operating table unpleasant, one example of the decay of proper feelings. He mistrusted, in fact, the free play of mere immediate experience. He believed, rather, that man’s attitudes and actions should be governed by, what he calls in the same poem, Stock Responses (e.g. love is sweet, death bitter, and virtue lovely).

Man must, for his own safety and pleasure, be taught to copy the Stock Responses in hopes that he may, by willed imitation, make the proper responses. He found this perfectly summed up in Aristotle’s “We learn how to do things by doing the things we are learning to do.”

Returning to the question of what Lewis might have thought of code poetry, I suspect he would be just as mystified as I am. Still, depending on how each individual poem resonates with the stock responses to which Hooper alludes . . . perhaps Lewis would embrace some of them as worthy expressions of a genuinely poetic heart.

The T.S. Eliot poem to which Lewis was responding, “The Love Song of J. Alfred Prufrock,” was published in 1915. If you are up to the challenge of interpreting it, you can read it here.

6 responses to Poetry for Geeks