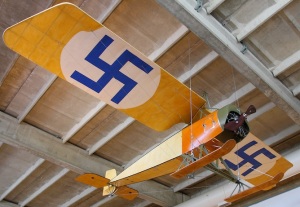 Few symbols evoke the intense reaction caused by the swastika. Regardless of the color in which it is rendered, it is inescapably associated with the Nazi insanity of the Third Reich.

And yet, for millennia it meant something else. And even today, in many lands it is recognized as representing something completely different.

I recently read a fascinating article* about the 1939-40 Winter War between the Soviet Union (Hitler’s “ally” at the time!) and tiny Finland. The Finns fought valiantly, and although in the peace settlement they forfeited territory to the insatiable communists, they inflicted terrible casualties on the aggressors.

Finnish bitterness toward the Soviets, due to their invasion, led them to ally with the Germans once the nonaggression pact between Germany and the Soviet Union ended. Without any sympathy for Nazi beliefs, they naturally hoped to regain the land they had been forced to surrender in 1940.

Prior to the Finnish alliance with Germany, the swastika already served as the official symbol of their small but talented Air Force. Ironically, they had adopted it in homage to the Swedish noble who donated one of the first foreign planes imported to fight the Russians.

The plane pictured above is the modest aircraft donated by Count Eric Von Rosen. The symbols adorning it are based on his personal crest, which was in turn based upon ancient Viking runes. It represented good luck.

After the decisive defeat of the National Socialist Party, the offensive symbol was virtually wiped away. However, as one writer says, “Although de-Nazification was enforced throughout Scandinavia, it was taken rather lightly in Finland, where the symbol had become an integral symbol for their Air Forces.

This is understandable because in Finland, the symbol meant something completely different than the common association linked to Hitler’s mania.

This should serve as an important lesson for those of us who work with words (which in large part are symbolic). A meaning we may consider patently obvious might turn out to be missed entirely by a reader for whom the “symbols” mean something else entirely. In Mere Christianity C.S. Lewis provides an entertaining illustration of this.

There is no need to be worried by facetious people who try to make the Christian hope of “Heaven” ridiculous by saying they do not want “to spend eternity playing harps.” The answer to such people is that if they cannot understand books written for grown-ups, they should not talk about them.

All the scriptural imagery (harps, crowns, gold, etc.) is, of course, a merely symbolical attempt to express the inexpressible. . . . People who take these symbols literally might as well think that when Christ told us to be like doves, He meant that we were to lay eggs.

The fact that we know the swastika has an ancient pedigree, and that it continues to mean something completely different than Nazism in some locales today, is unlikely to calm the minds of the vast majority of people who will never become comfortable with it.

Turning to Lewis once more we find a dynamic image that is perfectly apropos to our discussion of the swastika as a symbol. Symbols, he reminds us, are inherently powerful. Although written in a different context (“Williams and the Arthuriad”), Lewis could easily have had in mind the preeminent symbol of Nazism and the Holocaust when he wrote:

A symbol has a life of its own. An escaped metaphor—escaped from the control of the total poem or philosophy in which it belongs—may be a poisonous thing.

* You can download a copy of “The Winter War” from Air Force magazine at this link.