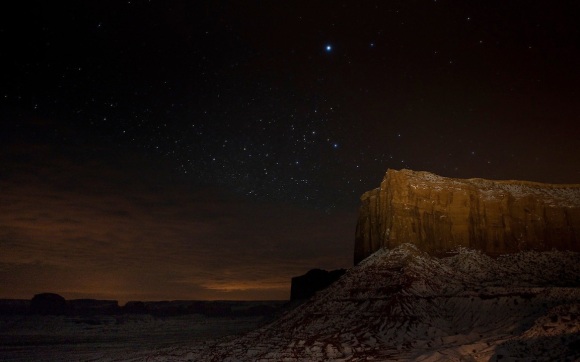 How many galaxies exist out there? How many stars? How many planets? Billions upon billions, apparently.

Of all of those myriad worlds, how many boast life?

C.S. Lewis pondered that subject in an essay entitled “Religion and Rocketry.” He said that either result—an absence of life, or an abundance of living creatures throughout the cosmos—can be used by atheists to deny the existence of our Creator.

In my time I have heard two quite different arguments against my religion put forward in the name of science. When I was a youngster, people used to say that the universe was not only not friendly to life but positively hostile to it.

Life had appeared on this planet by a millionth chance, as if at one point there had been a breakdown of the elaborate defenses generally enforced against it. We should be rash to assume that such a leak had occurred more than once. Probably life was a purely terrestrial abnormality. We were alone in an infinite desert. Which just showed the absurdity of the Christian idea that there was a Creator who was interested in living creatures.

But then came Professor F.B. Hoyle, the Cambridge cosmologist, and in a fortnight or so everyone I met seemed to have decided that the universe was probably quite well provided with habitable globes and with livestock to inhabit them. Which just showed (equally well) the absurdity of Christianity with its parochial idea that Man could be important to God.

Lewis, brilliant and honest, then predicts the future. Believers and cynics alike, he says, will seek to interpret all new data in a fashion that proves their own, preexisting beliefs.

This is a warning of what we may expect if we ever do discover animal life (vegetable does not matter) on another planet. Each new discovery, even every new theory, is held at first to have the most wide-reaching theological and philosophical consequences.

Fascinating as these comments are, they merely represent Lewis’ introduction to the subject. The heart of his concern is this—what would it mean if we should one day encounter alien beings created by God on a distant world?

In a moment I’ll share with you one of the most provocative thoughts Lewis expresses in this essay, but first take a moment to watch this amazing reminder of the vastness of our universe and the power of its Creator.

A video presentation like this can leave us feeling rather small, lost in the abyss of an immeasurable vastness. Or, it can inspire us. It can baptize us with an increased appreciation for the majesty of the One who loved each of us so profoundly that he sent his only begotten Son into the world to redeem us from destruction. I hope your reaction is the latter.

I promised another fascinating observation from Lewis, and here it is. He poses the question of precisely what might transpire if humanity encounters another sentient race. His Christian interpretation may shock some readers, but I believe he is right.

It sets one dreaming—to interchange thoughts with beings whose thinking had an organic background wholly different from ours (other senses, other appetites), to be unenviously humbled by intellects possibly superior to our own yet able for that very reason to descend to our level, to descend lovingly ourselves if we met innocent and childlike creatures who could never be as strong or as clever as we, to exchange with the inhabitants of other worlds that especially keen and rich affection which exists between unlikes; it is a glorious dream.

But make no mistake. It is a dream. We are fallen. We know what our race does to strangers. Man destroys or enslaves every species he can. Civilized man murders, enslaves, cheats, and corrupts savage man. Even inanimate nature he turns into dust bowls and slag-heaps. There are individuals who don’t. But they are not the sort who are likely to be our pioneers in space.

Our ambassador to new worlds will be the needy and greedy adventurer or the ruthless technical expert. They will do as their kind has always done. What that will be if they meet things weaker than themselves, the black man and the red man can tell. If they meet things stronger, they will be, very properly, destroyed.

Lewis continues, addressing related themes in this amazing work that seems more prescient each year. He next compares our encounters with fallen, and unfallen races. I highly commend the essay, which appears in The World’s Last Night and Other Essays.

If you prefer a fictional consideration of these same topics, I encourage you to read C.S. Lewis’ Cosmic Trilogy (Out of the Silent Planet, Perelandra, and That Hideous Strength).

Appreciation goes to a retired USAF chaplain colleague of mine, Chuck McGathy, for bringing this Hubble video to my attention.