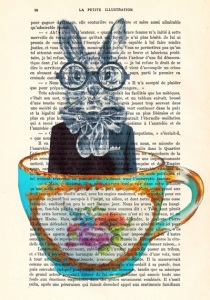 Many subscribers to Mere Inkling share a common trait with C.S. Lewis. Like your humble blogger, you are lovers of books. We don’t need to apologize for it; it’s in our DNA.

We carry that astonishing gene that manifests itself in a passion for the written word. (It’s frequently inherited from a parent who possessed the same ardor.)

If you’re one of this corpus of literary addicts, you just nod your head in agreement whenever you hear Lewis’ oft-quoted, “You can never get a cup of tea large enough or a book long enough to suit me.”

If you love books, if you don’t mind owning copies that others before you have enjoyed, and if you are on a tight budget, you might want to join me in becoming a customer of Better World Books.

[I have no interest in this nonprofit organization other than genuinely commending them to you as a wonderful source of inexpensive books. Most books have been officially removed from library collections . . . and require new homes. The “profits” are directed towards libraries and literacy programs.]

Many of us have enjoyed walking through rows of books on sale in local settings. This is a little like that, except that you can do digital searches and they have tons more titles available. (Literally.)

One of my recent purchases was Latin for the Illiterati. I purchased it the same day I bought The Anchor Book of Latin Quotations (for a secret project I’m working on).

Latin for the Illiterati includes “common phrases and familiar sayings,” that the reader is now able to decipher when encountered in classical literature. References do not have to be ancient to be included. For example, “salus populi suprema lex esto,” which means “the welfare of the people is the supreme law.” (But I didn’t need to translate that for you residents of Missouri, since it’s your own state motto.)

Quick test, which state has this as its motto? “Vox audita perit, litera scripta manet,” which means “the voice that is heard perishes, the letter that is written remains.” Actually, I cheated a bit, I don’t think it is any government’s motto, but it certainly is a truism that will resonate with readers!

C.S. Lewis valued rereading good books. In a 1915 letter, he wrote, “There is something awfully nice about reading a book again, with all the half-unconscious memories it brings back.”

In that same spirit, the following year he wrote to the same friend, “You really lose a lot by never reading books again.”

As I said, he was explicitly referring to revisiting a work already read. Nevertheless, I believe he would agree with the broader sense of his words . . . that it is a sad thing to see a book destined never to be read again.

Whether or not I am correct is irrelevant. The fact is that there are hundreds of thousands of books awaiting new homes. I don’t doubt that many of them “deserve” to be recycled for their raw materials. However, I also believe that the majority of them remain capable of teaching and inspiring. After all, litera scripta manet, right?