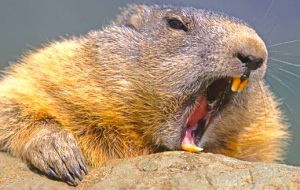 It’s rather ironic that after my last post on the peaceful harmony of wildlife I would choose to post on the subject of increasing violence among once peaceful forest mammals.

Beavers—of all the unlikely creatures—have apparently been growing more aggressive.

That’s a far cry from the gentle domestic rodents C.S. Lewis introduced us to in The Lion, the Witch and the Wardrobe. Just consider the politeness of Mr. and Mrs. Beaver when the Pevensie children are meeting Aslan for the first time:

“No, Sons of Adam before animals,” whispered Mr. Beaver back again.

As if we needed another reminder that we’re not in Narnia, reports out of Belarus indicate that beaver attacks are on the rise. In the most serious attack, a sixty year old man was actually slain by one of the web-footed amphibians. Accounts said a major artery in his leg was sliced by its “razor-sharp teeth.”

Well, worrisome certainly . . . until we hear the rest of the story.

It turns out the fisherman was assaulting the poor little animal. While we must remain considerate of the grief of the sportsman’s family, it appears he was driving past the beaver—which was presumably minding its own woodland business—when he decided it would be fun to grab it and force it to pose for a picture with him.

Apparently—make note of this lest you inadvertently arouse a beaver’s ire—since they are predominantly nocturnal, beavers become disoriented and irritable when forced to pose for portraits during the daytime.

It’s one thing to enjoy nature’s wildness from a distance. Quite another to interpose ourselves and expect undomesticated beasts to behave with good manners. After all, as we learned when Aslan created Narnia, he didn’t civilize all of the furry beavers:

He was going to and fro among the animals. And every now and then he would go up to two of them (always two at a time) and touch their noses with his. He would touch two beavers among all the beavers, two leopards among all the leopards, one stag and one deer among all the deer, and leave the rest. (The Magician’s Nephew).

13 responses to Beware of Beavers