Allow me to once again display my grammatical ignorance. I was reading an online book review and the author used lots of multisyllabic words. (That’s something I actually enjoy.) But then he went and threw in one of those words I had to rush to dictionary.com to define. (That’s another thing I love—learning new words.)

Naturally, I could partially decipher the definition from the context. However, whenever I have a dictionary within reach, that shortcut doesn’t satisfy me.

In this case, the word was anacolutha, the plural form of anacoluthon. It is defined as “a construction involving a break in grammatical sequence, as ‘It makes me so—I just get angry.’” Well, we can all agree that is not a good sentence; it’s a fine example of what a writer should avoid.

Not all grammar rules make sense. Take for example the notion that one cannot end a sentence with a preposition. Some of us literally had our knuckles rapped for scribbling such grammatical “obscenities.” While it’s true that you can avoid using prepositions in this manner, it’s not the great sin we were taught it was. In his Letters to an American Lady, C.S. Lewis writes:

[Regarding] a sentence ending with a preposition. The silly “rule” against it was invented by Dryden. I think he disliked it only because you can’t do it in either French or Latin which he thought more “polite” languages than English.

Well, isn’t that an interesting historical note to become aware of?

But, back to anacolutha . . . let’s see if it’s difficult for a trained pen to sever the ties of logic, and compose this sort of literary construction.

Reepicheep was a great swordsman who, “a tail is the honor and glory of a Mouse” was his creed.

Frodo pondered his options while—the Nazgûl loathed bathing more than once each fortnight.

Wow, that’s a lot harder than it looks. If you can think of better examples (not difficult, I’m sure), feel free to share them in a comment! But only write them here, and don’t allow any anacolutha to slip into your real writing! 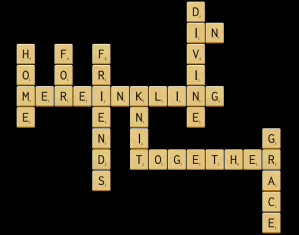