The Anguish of Suicide 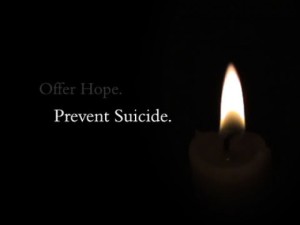 I was present at the scene of a suicide last night.

In my capacity as a volunteer chaplain with a local law enforcement agency, I was riding with a police officer. We were the initial first responders to arrive.

At the end of a rather uneventful shift, we received an urgent call to respond to a shooting. Naturally, I can’t reveal any details about the event beyond mentioning it involved a firearm. It was probably terribly similar to how you would imagine it to be.

To see a life so sadly cast aside is too sad for words. Contemplating the days ahead for those who loved the deceased is sobering. Their lives will never be the same, and that is the universal legacy bequeathed to family and friends by those who end their own lives. God have mercy on them.

C.S. Lewis understood how despair could drive a person to contemplate this irreversible choice. In a letter to a deeply grieving husband who had lost his wife, Lewis relates how suicide would never provide a genuine resolution to the pain caused by the loss.

One way or another the thing [romantic love] had to die. Perpetual springtime is not allowed. You were not cutting the wood of life according to the grain. There are various possible ways in which it could have died though both the parties went on living.

You have been treated with a severe mercy. You have been brought to see (how true & how very frequent this is!) that you were jealous of God. So from us you have been led back to us and God; it remains to go on to God and us.

She was further on than you [in Christian faith], and she can help you more where she now is than she could have done on earth.*

You must go on. That is one of the many reasons why suicide is out of the question. (Another is the absence of any ground for believing that death by that route would reunite you with her. Why should it? You might be digging an eternally unbridgeable chasm. Disobedience is not the way to get nearer to the obedient.)

There’s no other man, in such affliction as yours, to whom I’d dare write so plainly. And that, if you can believe me, is the strongest proof of my belief in you and love for you. To fools and weaklings one writes soft things. (A Severe Mercy by Sheldon Vanauken)

Vanauken, the recipient of the letter, had this response to Lewis’ challenging words: “After this severe and splendid letter, I loved Lewis like a brother. A brother and father combined.”

He continued by explaining how the letter had dispelled any consideration of suicide. “If I had been tempted at all to break my promise to Davy [his wife] about following her by [his] own act, the temptation vanished after one horrified look at Lewis’s ‘eternally unbridgeable chasm.’”

It will take some time for me to “process” my experience last evening. But, having seen death in the past, I found it less traumatic than many others would have.

And, of course, I never knew the person who chose to no longer breathe . . . or smile . . . or dream. I only became “acquainted” with them as I spoke to their spouse in the hours that followed. Sadly, because of a tragic choice, in this world they are merely a memory now.

Naturally, to those who knew and loved them, the vacuum created by their passing cannot be completely filled. Moreover, the wounds caused by the grim nature of their death by choice, will leave permanent scars.

The fact is that during the course of their lives, many people—quite possibly the majority of human beings—consider the possibility that suicide could end the pain they feel. But we must tirelessly remind them, and ourselves, that suicide is a permanent “solution” to temporary circumstances.**

* Lewis is referring to the concept that the saints (i.e. all believers) currently in the presence of the Lord may have the ability to intercede on behalf of those of us who are still “living.” The best way for Protestants to understand this may be by considering this line of thought: (1) we don’t hesitate to ask our sisters and brothers in Christ to pray for us, (2) we believe that God has already given eternal life to his disciples (meaning that even the departed remain alive), thus (3) it is not illogical that children of God now in his presence would be able to intercede for us in heaven.

Traditional Protestant reticence with this understanding is based in the concept most clearly espoused in I Timothy 2:5. Lewis, of course, was a Protestant himself, but Anglicans are among the minority of Protestants who affirm this practice.

** This is not to belittle the intense agony caused by chronic emotional suffering, but I believe there is a path that leads not to death, but to healing and life. If you have suicidal feelings, I strongly encourage you to seek out a skilled Christian counselor. (Not all clergy possess the necessary training, or the faith itself, to provide an adequate lifeline in these situations.)

If you’re unable to find a pastor in your local area, you can contact me at chaplainstroud at mereinkling dot com and I will attempt to get you in touch with a compassionate minister in your local community.