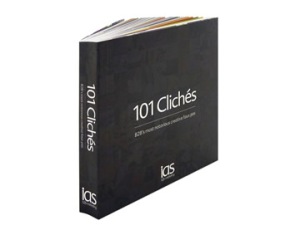 Avoiding clichés in one’s writing is such oft-repeated advice it’s nearly become a cliché itself.

Many do not make much sense to people approaching a language from a literal perspective. For example, those new to American English may require a bit of explanation to understand that “hit the books” refers to studying rather than literary pugilism.

Some clichés are easily deciphered, especially when read in context. As an admonition to stop obstructing a view, we can understand why someone would say, “You make a better door than a window.”

“Don’t rain on my parade” adequately warns the hearer to avoid dampening the speaker’s special plans or activities.

Folksy adages are common where clichés are concerned. Take “The acorn doesn’t fall far from the tree.” We all know it references a child who shares numerous traits with a parent.

And we have interchangeable versions of the same notion, in case a lazy writer wishes to alternate your redundancies. He/she is a “chip off the old block” means essentially the same thing. And there’s always the classic “like father, like son,” and its corollary “like mother, like daughter.”

“As snug as a bug in a rug” used to be a favorite of my mother, ever applicable as she tucked little ones into their beds. Today, however, with bedbugs plaguing humanity in epidemic proportions, that cuddly image may have lost a touch of its appeal.

Some clichés have clearly outlived any usefulness they may once have possessed. “Too many chiefs, and not enough Indians,” clearly refers to a situation in which everyone is in charge and there no one is able or willing to actually carry out the project. However, few writers would tempt incurring the wrath of readers by using such a dated and rather prejudiced saying.

A cliché, of course, is a typically trite phrase that has lost its element of ingenuity due to overuse. It is something serious writers strive to avoid at all costs. But the final phrase in my previous sentence reveals how difficult it can be to purge these worn out words from our writing. Whenever used, they should be included consciously; writers might utilize them to establish, for example, a comic tone.

Even the gifted C.S. Lewis recognized the threat of clichés worming their way into one’s work. In a 1922 entry in his diary he wrote:

Tried to work at Dymer [his narrative poem] and covered some paper: but I am very dispirited about my work at present—especially as I find it impossible to invent a new opening for the Wild Hunt. The old one is full of clichés and will never do. I have learned too much on the idea of being able to write poetry and if this is a frost I shall be rather stranded . . .

The word cliché itself originated in France, where it was a printing plate or stereotype cast from an original composed of movable type. (The casting freed the movable type for new projects while maintaining the lettering for possible future printings.) The word came to be applied to ready-made phrases. However, the casting of printing plates is one thing. Recycling exhausted phrases ad nauseum is quite another.

Clichés are generally limited to a particular country or culture. Some are restricted to given regions. When outsiders hear or read these phrases, they often make little sense.

Some gain international esteem. More than a century ago Lord Acton described a universal truth of politics that resonates across boundaries. We have all witnessed the truth that “absolute power corrupts absolutely,” but those wise words are not something we should typically parrot in our own writings.

Not knowing the original source of a cliché is common. It is rather tragic, though, when it comes to texts that should be familiar to writers. For example:

“All’s well that ends well” is one of Shakespeare’s best loved maxims. If most Americans were asked whether it came from the pen of the Bard or Benjamin Franklin, we might be sadly disappointed with the results.

“The writing is on the wall” infers the outcome is already determined. But too few recognize this as a reference to a miracle recorded in the Book of Daniel. (If you’re not familiar with it, you can read the story here.)

Some clichés that relate to the art of writing would include the following [with my modest illustrations attached]:

“You can’t judge a book by its cover.”

Appearances may be misleading.

Someone who appears wonderful when you first meet them may be just like an ebook with a professionally designed cover that contains a poorly scanned reprint replete with typos.

“It’s nothing to write home about.”

Something that’s boring and not worth retelling.

While the freedom of POD technology has created democracy within the publishing industry, it’s also led to millions of meandering “books” that should “never have seen the light of day.”

A person is “an open book.”

Someone who readily reveals their personality through word and action.

The type of character skilled authors will wish to introduce in limited quantities, especially if they are writing mysteries.

“Throw the book at him.”

Give him the maximum possible judicial punishment.

The well-deserved fate of best-selling authors who rest on their laurels and start “phoning in” their sequels.

We turn now to a non-literary but colorful example of an American colloquialism that has spread far from its origins in the swine-breeding communities where it undoubtedly originated. It’s one of my favorite clichés, and it just may have a few good uses left in it, so feel free to include it in your next column or book . . . and no need to cite me as your source:

A task is impossible, given what you have to work with.

The echoing refrain of editors whose clients expect them to transform a few dusty lumps of coal into diamonds.

While it’s safest for writers to avoid them altogether, there are a handful of occasions where they are not utterly inappropriate.

One suitable place for “chesnuts” like these to appear is in dialogue—especially when it’s written for a character a writer desires to portray as rather shallow-thinking.

It’s incorrect to suggest good writers never use clichés in conversation or composition. They do. The difference is that when they do include such tired phrases in their normally witty banter, they do it with a sense of irony.

C.S. Lewis, master of wordplay that he was, illustrated how we can creatively re-imagine or reword a cliché to reinvigorate it. Only the very best minds are up to this task. Yet, when it’s successfully accomplished, it can prove quite entertaining. The following comes from an informal conversation that was recorded before his retirement, preserved in the collection On Stories. Lewis refers in passing to an overly detailed passage in literature that nearly obscured the storyline.

The only trouble is that Golding writes so well. In one of his other novels, The Inheritors, the detail of every sensuous impression, the light on the leaves and so on, was so good that you couldn’t find out what was happening. I’d say it was almost too well done. All these little details you only notice in real life if you’ve got a high temperature. You couldn’t see the wood for the leaves.