I was shaped by the heroic religious films of the 1950s and 60s. The powerful messages of epic movies like Ben Hur, Quo Vadis and The Robe planted within my young Christian heart an awareness of nobility and radical self-sacrifice.

About twenty years ago, I spent a year doing graduate work in education. One of my Educational Psychology classes was taught by a professor who was a devotee of Transactional Analysis. I don’t recall too much about TA, aside from one of its principles that resonated with me.

It’s a concept called Life Scripts. Without going into great detail, it is an often subconscious notion of how we “think” our lives will or should play out. It’s adjusted throughout our lives, but the basic theme is established when we are quite young.*

A recent article says “script is broadly understood as a series of decisions, formed as coping strategies in childhood, which continue to shape the life course outside of awareness.”**

It was only as an adult that I realized just how significant an impression these virtuous stories made on me. I recalled the countless times I lay in bed at night rehearsing the story of The Robe. I was the unbelieving Roman soldier, converted by the gentle witness of the wrongfully persecuted Christians.*** Ultimately, I took my stand with them, defending them and voluntarily laying down my life for Christ.

That same plot line still echoes through my mind and soul.

I consider myself blessed to have been exposed to such positive influences while my self identity was being shaped. And I pray for children today whose parents allow them to be exposed (at terribly vulnerable ages!) to violent, fearful and morally ambiguous influences.

Those precious minds and hearts are scarred by the vulgarity and immorality that are endemic in modern cinema, television and music. May God have mercy on them.

C.S. Lewis lived during the era when the virtuous dramas such as those named above were at the peak of their influence.

In a diary entry from the mid-1920s, he mentions Quo Vadis in passing. He is describing his weekend schedule.

Saturday 22 April: Got up about 6.30 and did the same jobs as yesterday. Was settled to work by 9.5 o’clock and put in an excellent morning . . . Sheila Gonner—jolly child—came to tea. Dorothy is to come back tomorrow: so we shall no longer be servantless. At her request I lent her my crib to Tacitus’ History for her sister Rose— I wonder what makes her imagine that she would like it? Possibly early Christian novels of the Quo Vadis type. Worked again after tea, and from supper till ten o’clock, finishing Herodotus. The last few pages of the IXth Book I now read for the first time, having got tired of it on my first reading . . .

I find this diary passage intriguing, in the way that Lewis posits a reader’s potential interest in classical literature as arising from their exposure to ancient Rome via contemporary novels. That’s precisely where my own lifelong fascination with the Roman empire was born.

If you’ve never seen these three movies, I commend them to you. I would also encourage you to consider reading one or all of the novels. They are available for free download in various digital formats.

* I’m a pastor and historian, not a psychologist, so I don’t pretend to understand all of the implications. Because of that, I don’t endorse TA as a fully valid theory. What’s more, in our fallen world it’s obvious that many early “life scripts” can be based on wounds inflicted on neglected or abused children. In such cases, particularly where the scripts are destructive, we are not “destined” to live out a tragedy. By the grace of God, even the saddest of stories can be redeemed and “rewritten” into tales of hope and wonder.

** From “Script or Scripture?” by Jo Stuthridge in Life Scripts edited by Richard Erskine (Karnac Books, 2010).

*** It didn’t hurt that the main Christian disciple in the film was the lovely and chaste Diana, played by the British actress Jean Simmons. But that’s another story, and it’s important to note that these life scripts are pre-pubescent creations, so they are motivated by much deeper impulses than hormones. As the previously footnoted quotation referred to them, they are fundamentally “coping strategies” for survival in the calm (or frequently turbulent) world in which children find themselves. 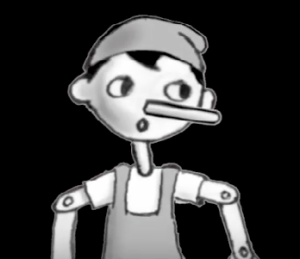 Do you ever have trouble remembering the key elements of a story? Well, you may not now, since you’ve become an accomplished writer. However, there was once a time when you were just learning about such matters. And that learning might have been far easier than it was if some of today’s teaching resources existed then.

This week I stumbled across a very unusual approach to teaching the fundamental building blocks of stories. You might want to bookmark the page, in case you ever experience difficulty remembering those five pesky elements required for your short fiction, or want to teach a young learner. You need look no further than Flocabulary’s innovative lesson “Five Things.”

The song is less than four minutes long, so go ahead and watch it now, before reading on. (Barring a small typo, it’s quite educational, and their website includes testimonials from teachers affirming how well it connects with young people.) Despite the fact that it’s got a hip-hop beat—not my favorite musical genre—it’s actually quite entertaining . . . and it’s easy to see how well it would connect with today’s younger students.

[Warning: If you watch the following video, you may well be singing along with the chorus before it ends.]

Setting, yes these are the 5 things

That you’re going to be needing

When you’re reading or writing

Music is a powerful medium, and when it is harnessed for educational purposes, it can accomplish wonderful things.

Music can be enjoyed for itself . . . its own inherent loveliness.

Music can also be used to communicate holy things. I believe this is the very reason it exists. Divine grace and our response to our Creator’s love are too majestic to be restricted to simple words.

The brilliant African Bishop Augustine of the city of Hippo is cited as saying “he who sings, prays twice.” Many have echoed these words. I have no doubt Augustine believed this, but the more accurate quotation is: “he who sings well prays twice” (bis orat qui bene cantat). Lest those of us with less than professional vocal chords be dismayed, I am confident the “well” here refers here to worshiping God in spirit and truth (John 4:23).

I have no doubt which of these two pleases God more. The most wondrous voice ever created (a gift itself from our Creator) flawlessly navigating three octaves and singing of the cares of this world—or the feeble, cracking, off-key strains of a tone deaf beggar who is praising the Lord for the gift of his daily bread.

C.S. Lewis famously expressed his disaffection for most church hymnody in a 1950 letter where he wrote:

I naturally loathe nearly all hymns; the face and life of the charwoman in the next pew who revels in them, teach me that good taste in poetry or music are not necessary to salvation.

We must forgive Lewis his condescending comment here, which was only meant for a private communication. And, if read in context it can be interpreted almost as a sort of confession. While he disliked the quality of contemporary Anglican hymns, he was acutely aware of how insignificant the matter was in light of the vital importance of  knowing Christ. (His description of the glorification of the modest Sarah Smith in The Great Divorce reveals how well he recognized that the charwoman beside him, despite her musical preferences, could easily dwarf him in holiness and religious courage.)

In a letter written in 1916, Lewis alluded to the wonder of music, and it’s relationship to particular words. “Isn’t it funny the way some combinations of words can give you—almost apart from their meaning—a thrill like music?”

Toward the end of his life, Lewis invested much time in a literary study of Edmund Spenser’s The Faerie Queene. (It was actually published after his death, based upon his notes, as Spenser’s Images of Life. It includes a sparkling description of the book as a musical masterpiece.

A story of this kind is in a way more like a symphony than a novel. Corresponding to the themes of the musical form, the literary form has images, which may be delicious or threatening or cryptic or grotesque, but which are always richly expressive of mood.

The images are in every possible relation of contrast, mutual support, development, variation, half-echo, and the like, just as the musical themes are. But the ostensible connection between them all—what keeps the meddling intellect quiet—is here provided by the fact that they are all happening to someone.

They are all worked into the experience or the world of the characters “whose” story it is. That, no more and no less, is the raison d’étre of characters in the characterless story.

I have no doubt Lewis would have found the video above jarring. Yet, I suspect he would have approved of the fact that the music was creating a bridge to some for whom traditional learning is incomprehensible. He was a traditionalist. In many ways, a medievalist. But he was, above all, a redeemed child of God. And, because of that, he desired the best for his neighbor, his nation, and our world.

That said, I don’t want to hear that any readers of Mere Inkling got it into their heads to put any of C.S. Lewis’ words into hip-hop melodies. Ever!

If you are interested in checking out the official website for Flocabulary, you can view their lesson “Wordplay” (on figurative language). I understand, however, that some of their lessons with political dimensions have been considered superficial.