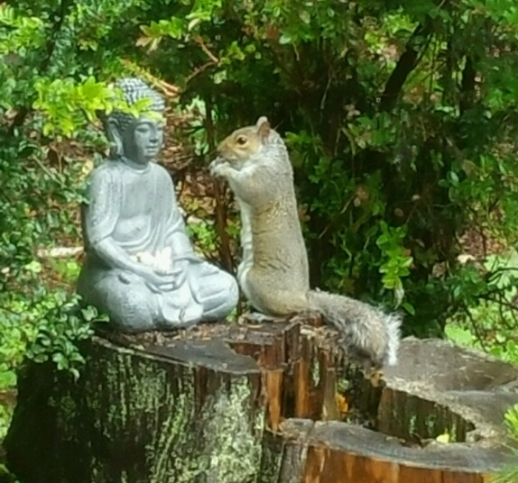 It’s curious to consider the varieties of deities worshipped throughout history and around the globe. And it is important that we understand the god we choose to follow, as well as the nature of “faith” allows us.

This picture came from a nearby garden. The squirrel effects the pose of a worshipper, but it’s motivated by the nuts the gardener has rested in the Buddha’s lap. It’s not intended to be irreverent, and one assumes that Siddhārtha Gautama would not be offended.

The image is provocative. If you were to put yourself in the squirrel’s place, it would be of no surprise that you would be devoted to the “Provider of Nuts,” especially if you did not make the connection between the gentleman who filled and the statue that actually offers them to you.

Whether we are adherents of one of the so-called monotheistic religions, or pantheists who see the presence of god in all of universal nature, our “religion” directly affects our worldview and life choices.

And then there are the “no religious preferences,” who embrace or reject labels like “agnostic.” Some of them long to believe, but demand proof, where God calls for faith. Others opt for lives of hedonism, gambling that their notion there is no Creator is right. Many of these individuals actively hope that there is no God, and not a few of them have a nagging fear that he may just exist, and call them to account one day for their selfish lives.

C.S. Lewis was in the latter category. Before he became a Christian, Lewis entertained no desire to seek Christ out. “Amiable agnostics,” he wrote, “will talk cheerfully about ‘man’s search for God.’ To me, as I then was, they might as well have talked about the mouse’s search for the cat” (Surprised by Joy).

About the Nature of Faith

God chooses to call us into a restored relationship with himself through the mechanism of faith. If that word troubles you, think of it as “trust.” Faith is necessary, for an obvious reason. In the New Testament, we read, “without faith it is impossible to please him, for whoever would draw near to God must believe that he exists and that he rewards those who seek him” (Hebrews 11:6).

That faith is necessary may sound intimidating. However, the good news is that what God demands, he himself provides . . . even to the most reluctant of converts such as Saul of Tarsus or C.S. Lewis of Oxford.

For by grace you have been saved through faith. And this is not your own doing; it is the gift of God, not a result of works, so that no one may boast. (Ephesians 2:8-9)

In Mere Christianity, C.S. Lewis discusses the nature of faith at great length. He provides a number of helpful images. In the book he clearly distinguishes between faith (trust) and feelings or moods. I enjoy the way that the final sentence of this passage is evocative of the worshipping squirrel which inspired these reflections.

Faith, in the sense in which I am here using the word, is the art of holding on to things your reason has once accepted, in spite of your changing moods. For moods will change, whatever view your reason takes. I know that by experience.

Now that I am a Christian I do have moods in which the whole thing looks very improbable: but when I was an atheist I had moods in which Christianity looked terribly probable. This rebellion of your moods against your real self is going to come anyway.

That is why Faith is such a necessary virtue: unless you teach your moods “where they get off,” you can never be either a sound Christian or even a sound atheist, but just a creature dithering to and fro, with its beliefs really dependent on the weather and the state of its digestion.

Dithering to and fro, indeed.

I had been thinking about writing on this subject ever since I saw the photo, some months ago. I was spurred to compose it now, by a fact that recently appeared in Ripley’s Believe It or Not. It speaks for itself.

A Brazilian grandmother believed she was praying to a figurine of Saint Anthony for years, only to discover that it was an action figure of the Elf Lord Elrond from the “Lord of the Rings” films!