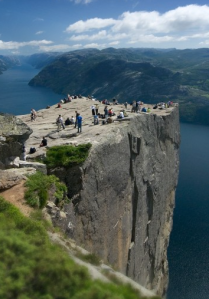 Actually, the title may be slightly misleading, since we don’t know the nationality of the people who risked their child’s life over a 2,000 foot cliff . . . but the scene of their crime was one of Norway’s amazing natural wonders.

Preikestolen, is known in English as Pulpit Rock. It is a rare geological feature, a pillar of rock thrusting 1,982 feet from the ground, with three sides a sheer drop to the rocks. It stands majestic, adjacent to a picturesque fjord.

It’s lovely to behold. But only a fool would want to walk out on it, right?

I mean, just look at it. Doesn’t anyone else notice the huge fissure that splits the pulpit right in half? As I look at it, I can just imagine it splitting down the middle with the exposed side crashing down like an enormously oversized and exponentially elongated domino . . . but a domino made out of granite exposed for eons to the frigid Nordic winters so when it strikes the earth it will shatter into a million and a half fragments like a sheet of ice. Well, that’s what I see when I look at the pictures.

What I don’t see is a tourist site where I would like to prance out and pose for a photo beside the edge, or pretend to have accidentally fallen off the side.

Nope, not by a long shot.

As one visitor said, “It’s a straight drop. You don’t want to go too close because it’s pretty scary. You’d be pretty much dead if you fall down there.”

Nevertheless, scores of thousands of people every year prove how few cautionary genes they and I share by doing just that. Of course, I do share with C.S. Lewis the conviction that courage is utterly necessary for living a Christian life in an anti-Christian world. Even Screwtape understands that!

Courage is not simply one of the virtues, but the form of every virtue at the testing point, which means, at the point of highest reality. A chastity or honesty or mercy which yields to danger will be chaste or honest or merciful only on conditions. Pilate was merciful till it became risky. (The Screwtape Letters).

But this sort of courage does not necessarily translate into foolhardy risking of one’s fragile body.

Apparently, Preikestolen is quite a popular spot.

I offer links below to a several videos of crazy stunts people have pulled on the small bluff. Some people apparently also like to go there for picnics. That reminded me of a column I posted about “Rational Fears” related to another frightening dining experience.

Tragically, in 2013 a tourist fell from the precipice while shooting photos. But here is the amazing part of that story: “Local sheriff Odd-Bjørn Næss said it was the first time anyone had accidentally fallen over the edge of Preikestolen.”

Up until I read the sheriff’s statement I had always taken pride in my 50% Norse lineage. One reason was because I considered my ancestors sturdy and honest folk. Yes, I see the sheriff’s “accidentally” disclaimer, and I suspect they do experience a number of suicides . . . but I believe that with all of the foolish behavior transpiring at Preikestolen there must be more fatal accidents . . .

The Crime With Which We Began

Accidents, of course, are not crimes. But this, most certainly is. Some adults, presumably the baby’s parents, put their small child at terrible risk by posing her or him beside the edge of the cliff simply to take some shocking photographs.

Yes, you read that right.

They set their little child, who was crawling at the time, on the brink of a 2,000 foot drop!

If you’re familiar with precious little ones, you know that babies do not always crawl in a straight line. Nor do they always continue moving in the direction you plan for them. Not only that, but they are prone to taking occasional tumbles–perhaps even rolling over onto their side or back. And on this rugged pillar top, mind you, the baby was on an extremely uneven, and possibly slippery, surface.

Simply put, these parents are criminals. In every civilized country I’m aware of, “child endangerment” is a crime. You can read the story about their foolhardy action here, and see the frightening photo from which this small image is cropped. (You can see the original picture and the the accompanying article here.)

Unfortunately, they pixilated the adults’ faces, so they can’t be recognized. Seems to me that they should have allowed them to be identified . . . if not for trial, for public shaming so they would be forced to reflect on the responsibilities one assumes as a parent.

Preikestolen is not the only deadly sightseeing destination in Norway. Another goes by the more foreboding name of Trolltunga, Troll’s Tongue. It too has claimed at least one life, and from the photo of the small spit of rock, I can’t imagine why anyone would want to walk out on it.

A Base Jumper Who Nearly Dies

Free Hanging Off of the Cliff

There are more examples of the craziness evoked by the image of Preikestolen, but these are representative. I thank God I don’t feel the slightest envy as I watch people base jumping, free hanging, or slack lining.

I’m content to get my adrenaline rushes from reading a great book.