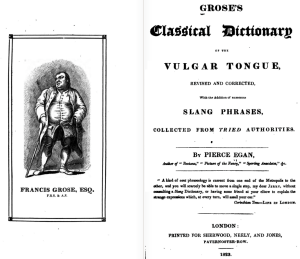 If I were to say “vulgar Christianity is a good thing,” what would you think?

It depends, doesn’t it, on the meaning you ascribe to the word “vulgar.” For, even though it is most often used in a derogatory sense today, vulgar also means common or genuine.

Here, in modified order, are some definitions gleaned from an internet dictionary. The first three represent the most vulgar use of the word.

The next two definitions relate to the more historic, rather less crass application of the word.

The final definition of vulgar relates to language: “spoken by, or being in the language spoken by, the people generally; vernacular: vulgar tongue.”

The most visible adaptation of the root word likely comes in the title of the Latin translation of the Holy Scriptures completed by the ascetic saint, Jerome (347-420). The Vulgate, came to be called in Latin versio vulgata or vulgata editio, which meant the commonly used or read version.

Naturally, Lewis did not communicate in a vulgar (objectionable) way. He did, however, strive to reach the common men and women of the day, doing so more effectively than many clergy appear(ed) capable.

There are ample examples of the wide use of the word in Lewis’ works. In “Christianity and Culture,” he distinguishes between objective and subjective assessments of the value of literature.

A bad book is to be deemed a real evil in so far as it can be shown to prompt to sensuality, or pride, or murder, or to conflict with the doctrine of Divine Providence, or the like. The other dyslogistic terms dear to critics (vulgar, derivative, cheap, precious, academic, affected, bourgeois, Victorian, Georgian, “literary,” etc.) had better be kept strictly on the taste side of the account.

In discovering what attitudes are present you can be as subtle as you like. But in your theological and ethical condemnation (as distinct from your dislike of the taste) you had better be very un-subtle. You had better reserve it for plain mortal sins, and plain atheism and heresy.

For our passions are always urging us in the opposite direction, and if we are not careful criticism may become a mere excuse for taking revenge on books whose smell we dislike by erecting our temperamental antipathies into pseudo-moral judgements.

In Studies in Words, we gain an interesting insight into Lewis’ understanding of himself. He discusses how the concept of “bourgeois,” which simply means middle-class or conventional, is twisted by elitists to mean something offensive.

All my life the epithet bourgeois has been, in many contexts, a term of contempt, but not for the same reason. When I was a boy—a bourgeois boy—it was applied to my social class by the class above it; bourgeois meant “not aristocratic, therefore vulgar.”

When I was in my twenties this changed. My class was now vilified by the class below it; bourgeois began to mean “not proletarian, therefore parasitic, reactionary.” Thus it has always been a reproach to assign a man to that class which has provided the world with nearly all its divines, poets, philosophers, scientists, musicians, painters, doctors, architects, and administrators.

For those who have read this far, I offer now one of Lewis’ poem with a related theme. Enjoy.

On a Vulgar Error

No. It’s an impudent falsehood. Men did not

Prosaic mad, inelegant, or what not.

Was the first pointed arch esteemed a blot

Upon the church? Did anybody say

How modern and how ugly? They did not.

With rhymes from France, or spices from Cathay,

Were these at first a horror? They were not.

If, then, our present arts, laws, houses, food

All set us hankering after yesterday,

Need this be only an archaising mood?

Why, any man whose purse has been let blood

By sharpers, when he finds all drained away

Must compare how he stands with how he stood.

If a quack doctor’s breezy ineptitude

Has cost me a leg, must I forget straightway

So, when our guides unanimously decry

The backward glance, I think we can guess why.

The image above is taken from Grose’s Classical Dictionary of the Vulgar Tongue by Pierce Egan (1823). Caution, even though this slang is centuries old, some of it is vulgar in every sense of the word; it may even cause one to blush.