Dreaming of the Ark 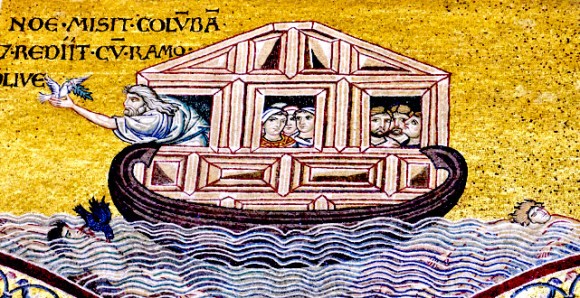 In the middle of the night, I heard a voice. But no one was there. Talk about unusual dreams. For the first time in my life, I awoke from a dream without any lingering images or sensations. All I recalled was a sentence. Just the words.

Unlike my recurrent dreams about being back in the military (occasionally in combat, but usually at a new base where I don’t know my way around), this one was jarring.

I feel like I awoke right after “hearing” these words. From their context, I knew they referred to the ark piloted by Noah and his family.

“Here on the ark we don’t have shuffleboard, but we do have a broom.”

I wouldn’t give it any credence at all, but for God’s prophecy recorded in Joel. “And it shall come to pass afterward, that I will pour out my Spirit on all flesh; your sons and your daughters shall prophesy, your old men shall dream dreams, and your young men shall see visions. (Joel 2:28) After all, the words contradict no biblical doctrines, and I certainly qualify age-wise to be a dreamer.

Now, I’m not a certified dream analyst (and I’m wary of anyone who is), but I see a worthwhile message in this phrase. It may only be for me personally . . . but perhaps others could benefit from it too.

You see, the ark is an ancient metaphor for the Christian church.* Even in the Bible itself, Peter points to the account as a sign of baptism (1 Peter 3:20). It’s no accident the central part of the church where the laity sit, between the entrance and the chancel (or altar area), is call the “nave.” This comes from the Latin word for ship, navis.

In fact, in traditional church architecture, the nave is quite often raised to a peak in a manner that reflects the inverted structure of a vessel. In many older churches the similarities between the ceiling and the inverted hull of a ship are quite evident. (Of course, in addition to the ark, there are a number of other biblical events featuring boats.)

So, what meaning did I apply to these words as I lay there wide awake contemplating them?

I have a place on the ark (within the church). I am welcome. But I am mistaken if I came aboard anticipating a pleasure cruise. This is a voyage where I have important responsibilities—and they are not necessarily going to be glamorous ones. In other words, I am to pick up my broom and clean the stables.

The Timing of this Dream

One of my recent prayer focuses has been stewardship. I was re-convicted of my lack of generosity while reading Mere Christianity.

Charity—giving to the poor—is an essential part of Christian morality . . . I do not believe one can settle how much we ought to give. I am afraid the only safe rule is to give more than we can spare.

In other words, if our expenditure on comforts, luxuries, amusements, etc., is up to the standard common among those with the same income as our own, we are probably giving away too little. If our charities do not at all pinch or hamper us, I should say they are too small.

There ought to be things we should like to do and cannot do because our charities expenditure excludes them.

I believe Lewis is absolutely right.

I struggle with how little I deny myself, while Christian families today can be freed from modern-day slavery for less than a thousand dollars!

Another specific reason why the ark resonates with me now, is the fact my wife and I have discussed our long held dream to take a cruise to Alaska. We’ve talked about it for years, actually planning to go for our fortieth anniversary (a couple of years ago).

That day may still come . . . but not before we help free some of our sisters and brothers from debt slavery in Pakistan. After all, God’s been extravagantly generous with us, and given us a place of safety from the floodwaters. So the entertainments will have to wait, and I’ll seek to find my joy by taking up my broom.

C.S. Lewis wrote a poem about the ark, which can be found in Poems. Entitled “The Late Passenger,” its original title was the “Sailing of the Ark.”

“’Look, look! It would not wait. It turns away. It takes its flight.

Fine work you’ve made of it, my sons, between you all to-night!

“’Even if I could outrun it now, it would not turn again

—Not now. Our great discourtesy has earned its high disdain.

“Oh noble and unmated beast, my sons were all unkind;

In such a night what stable and what manger will you find?

With indignation! Oh the neck wave-arched, the lovely pride!

Before it comes to stable and to manger once again,

“And dark and crooked all the ways in which our race shall walk,

And shrivelled all their manhood like a flower with broken stalk . . .”

Because the poem addresses a fanciful scene, its intended meaning has been misconstrued. In 1958, he wrote to his good friend Roger Lancelyn Green:

I say–the Sailing of the Ark is not (humiliating explanation!) meant to be funny. The Unicorn, as often in medieval symbolism, is Christ, rejected. The ‘stable and manger’ to which He will come long after are those at Bethlehem.

* Saint Augustine includes an interesting discussion of Noah, including the ark, in Book 12 of Contra Faustum. See chapters 14-24 here, if you are interested. Below you will find a small sample of Augustine’s teaching.

That Noah, with his family is saved by water and wood, as the family of Christ is saved by baptism, as representing the suffering of the cross. That this ark is made of beams formed in a square, as the Church is constructed of saints prepared unto every good work: for a square stands firm on any side. . . .

That the beams of the ark are fastened within and without with pitch, to signify by compact union the forbearance of love, which keeps the brotherly connection from being impaired, and the bond of peace from being broken by the offenses which try the Church either from without or from within. For pitch is a glutinous substance, of great energy and force, to represent the ardor of love which, with great power of endurance, bears all things in the maintenance of spiritual communion.

That all kinds of animals are inclosed in the ark; as the Church contains all nations, which was also set forth in the vessel shown to Peter. That clean and unclean animals are in the ark; as good and bad take part in the sacraments of the Church. . . . as the Church, the body of Christ gathered into unity, is raised to perfection. So Christ says in the Gospel: “He that gathers not with me, scatters.” (Matthew 12:30) That the entrance is on the side; as no man enters the Church except by the sacrament of the remission of sins which flowed from Christ’s opened side.

The Church Father Tertullian discusses the ark in his treatise on baptism.

In the next place [in the baptismal rite] the hand is laid on us, invoking and inviting the Holy Spirit through benediction. Shall it be granted possible for human ingenuity to summon a spirit into water, and, by the application of hands from above, to animate their union into one body with another spirit of so clear sound; and shall it not be possible for God, in the case of His own organ, to produce, by means of “holy hands,” a sublime spiritual modulation?

But this, as well as the former, is derived from the old sacramental rite in which Jacob blessed his grandsons, born of Joseph, Ephrem and Manasses; with his hands laid on them and interchanged, and indeed so transversely slanted one over the other, that, by delineating Christ, they even portended the future benediction into Christ.

Then, over our cleansed and blessed bodies willingly descends from the Father that Holiest Spirit. Over the waters of baptism, recognizing as it were His primeval seat, He reposes: (He who) glided down on the Lord “in the shape of a dove,” in order that the nature of the Holy Spirit might be declared by means of the creature (the emblem) of simplicity and innocence, because even in her bodily structure the dove is without literal gall. And accordingly He says, “Be simple as doves.”

Even this is not without the supporting evidence of a preceding figure. For just as, after the waters of the deluge, by which the old iniquity was purged—after the baptism, so to say, of the world—a dove was the herald which announced to the earth the assuagement of celestial wrath, when she had been sent her way out of the ark, and had returned with the olive-branch, a sign which even among the nations is the fore-token of peace; so by the self-same law of heavenly effect, to earth—that is, to our flesh—as it emerges from the font, after its old sins flies the dove of the Holy Spirit, bringing us the peace of God, sent out from the heavens where is the Church, the typified ark.

But the world returned unto sin; in which point baptism would ill be compared to the deluge. And so it is destined to fire; just as the man too is, who after baptism renews his sins: so that this also ought to be accepted as a sign for our admonition. (Chapter 8)

In more recent times, Billy Graham preached a sermon in which he likened Christ himself to the ark. “The ark,” the famous evangelist proclaimed, “is a symbol of Jesus Christ. In this day, when the clouds of judgment are beginning to gather, Christ is the refuge.”

10 responses to Dreaming of the Ark