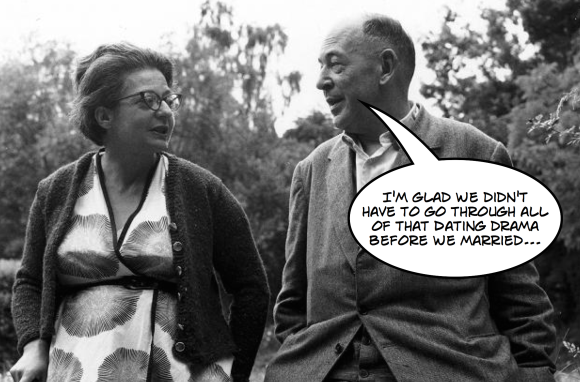 I don’t recall ever reading about C.S. Lewis’ dating life.

Certainly, much has been written about his late marriage to Joy Gresham. It began as one of legal convenience, allowing her to remain in England, and grew into genuine love.

The book he anonymously penned as he grieved her passing is regarded by many as his most moving work.*

Another relationship in Lewis’ life that has provoked much speculation, was his care for the mother of one of his friends who died in WWI. The fact that the two young soldiers had vowed to care for one another’s parents in that event, does not dispel questions about what that particular relationship may have developed into.

Yes, I’ve read a great deal about the women in Lewis’ life, but until recently I had not encountered his thoughts on dating while he was a young man. In a 1926 letter to his father, he related an odd predicament he was experiencing as a young professor.

. . . I have been bothered into the last job I ever expected to do this term: taking a class of girls once a week at one of the women’s Colleges. However, I am not engaged to be married yet, and there are always seven of them there together, and the pretty ones are stupid and the interesting ones are ugly, so it is alright.

I say this because as a general rule women marry their tutors.

I suppose if a girl is determined to marry and has a man alone once a week to whom she can play the rapt disciple (most fatal of all poses to male vanity) her task is done.

The most humorous part of this is Lewis’ accurate assessment of male vanity.

This passage got me thinking about the subject of dating.

Is dating fun? I’m sure to many it is. But, I suspect that to the majority of people, lacking a committed relationship is an unwelcome fact of life.

It seems to me that one of the very best things about having been happily married for 39 years, is not needing to date. I don’t remember it a being all that fun at the time. But then, memories can get foggy after so long.

Lewis was utterly content being an aging bachelor. In truth, the state suited him well, and many of his friends were shocked when he wed.

In marriage he encountered much unexpected happiness. But Lewis, despite being a Romantic, remained a Rationalist. He was no dreamer who professed idealized version of marriage that was immune to human flaws.

In 1962 he shared this wonderfully honest assessment of marriage . . . and this refers to a truly good marriage.

I nominally have [a place of my own] and am nominally master of the house, but things seldom go as I would have chosen. The truth is that the only alternatives are either solitude (with all its miseries and dangers, both moral and physical) or else all the rubs and frustrations of a joint life.

The second, even at its worst seems to me far the better. I hope one is rewarded for all the stunning replies one thinks of one does not utter! But alas, even when we don’t say them, more comes out in our look, our manner, and our voice. An elaborately patient silence can be very provoking! We are all fallen creatures and all very hard to live with.

If only we were all so honest as Lewis. Life would be simpler and we might actually become a little “easier to live with.” Spouses, family and friends would surely appreciate that new self-awareness.

* A Grief Observed. I have quoted from the volume in the past, including here and here.

Leave a Reply to Dorah A. K. Cancel reply