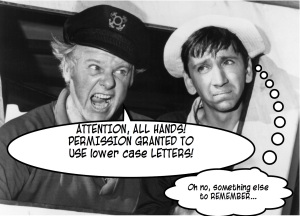 The United States Navy finally realized what everyone else long ago recognized—writing in ALL CAPS is obsolete.

Only the most novice users of the internet type in all caps. After all, people quickly learn that it is tantamount to “shouting,” and considered rude behavior.

The occasional word or phrase may properly be rendered in CAPS, in order to emphasize it when italics are not available, BUT WRITING EVERYTHING IN CAPITAL LETTERS IS SURELY TO BE AVOIDED.

The advent of the computer has freed us from the limited conventions forced upon us by typewriters. For emphasis, we lacked boldface and italic fonts (unless one had access to an IBM Selectric or one of its clones).

Back in the “olden days,” we had to be satisfied with unsightly underlining. Surprisingly, many people today seem unaware that underlining is obsolete . . . but that’s a subject for another day.

Returning to the use of all capital letters. Earlier this year, the Navy caught up with the rest of the universe’s practice and changed their official policies which required CAPITALIZATION in internal, official messages.

It was wonderfully fitting that the official memorandum read:

AUTHORIZED TO USE STANDARD, MIXED-CASE CHARACTERS IN THE BODY OF ORGANIZATIONAL MESSAGES.

However, lest any sailors get carried away with this modern fad, the message continued:

RECOMMEND CONTINUE TO USE UPPER CASE IN LINES BEFORE REMARKS.

As a retired military chaplain I love the following (unattributed) quotation from an article on the subject.

“If an ancillary benefit is that sailors reading message traffic no longer feel they’re being screamed at . . . that is a good thing too,” said a Navy official. The official insisted the move was not an example of the service going soft.

Well, we certainly couldn’t have that!

I’m not aware of any places where C.S. Lewis resorts to the use of capital letters to emphasize anything. But in searching for just such a thing, I came across a fascinating passage in the introduction to his English Literature in the Sixteenth Century.

Lewis’ descriptions are always vivid and his description of “ruthless emphasis” does not disappoint.

The rough outline of our literary history in the sixteenth century is not very difficult to grasp. At the beginning we find a literature still medieval in form and spirit. . . . Their prose is clumsy, monotonous, garrulous; their verse either astonishingly tame and cold or, if it attempts to rise, the coarsest fustian. In both mediums we come to dread a certain ruthless emphasis; bludgeon-work. Nothing is light, or tender, or fresh. All the authors write like elderly men. The mid-century is an earnest, heavy-handed, commonplace age: a drab age.*

The use of all caps strikes me as akin to “bludgeon-work.” Not nearly so graceful as occasional italics or the even more skillful manipulation of the English language itself in order to emphasize its message.

At least we can take some small comfort in the fact that the Navy has joined the “mixed-case” twenty-first century. I assume there remain a handful of holdouts in the Admiralty, but eventually these old salts will retire, and the new day of “upper and lower case diversity” will have fully dawned.

* If you are interested in seeing the rest of Lewis’ thoughts about “the rough outline of our literary history in the sixteenth century,” read on.

Then, in the last quarter of the century, the unpredictable happens. With startling suddenness we ascend. Fantasy, conceit, paradox, colour, incantation return. Youth returns. The fine frenzies of ideal love and ideal war are readmitted. Sidney, Spenser, Shakespeare, Hooker—even, in a way, Lyly—display what is almost a new culture: that culture which was to last through most of the seventeenth century and to enrich the very meanings of the words England and Aristocracy. Nothing in the earlier history of our period would have enabled the sharpest observer to foresee this transformation.

10 responses to Ending ALL CAPS