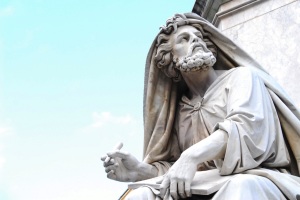 Some Christian writers face a terrifying dilemma. They think God has inspired their work. That may be true. But then they proceed a step further and assume that “if God has given these words to me, they can’t be changed.”

The inference, of course, is that the message is essentially inspired in the same sense as Christians normally view the Holy Scriptures themselves. They become, in a word, inviolate.

It’s almost as though the author has appropriated the words of the Apostle John, who in his Revelation was inspired to write:

Naturally, this mindset can cause a bit of a problem when it rears its head in a writing critique group. I’ve witnessed it more times than I can recall, having been a member of such groups on several continents.

I’ve learned to be extremely cautious in how I attempt to explain to the person that while they may rightly feel that their work is inspired by their faith, it doesn’t necessarily follow that it remains in an unblemished condition . . . as it was received by our imperfect human senses, processed by our imperfect minds, and put into words via our imperfect skills and finite vocabulary.

No matter how gently this is said, most of these individuals don’t last long in writers groups. They drop out when others offer suggestions on how to improve their work, seemingly stunned that everyone else doesn’t simply fall prostrate in adoration at their words. It’s quite sad.

That’s why it was so refreshing to read the following in the preface to J. Budziszewski’s What We Can’t Not Know, which I highly recommend.

It seems to me that every writer should end with gratitude to the one who was in the beginning, and whose very name is Word. A reviewer—a friendly one—once remarked that it seemed strange to see that sort of thanks in a book, as though the author were claiming divine inspiration. Of course, for whatever is amiss in these pages (and there will be much), the blame is mine. But permit me to be grateful if anything in them is true.

I love this paragraph. In part, because I share his sentiments. It echoes my own words, spoken at my military retirement, “attribute to me all of the failings and disappointments in my work, and to God any positive or healing results that followed my ministry.”

This worldview proclaims Soli Deo Gloria,* and simultaneously acknowledges that I am not God. It is good for writers to occasionally be reminded of that fact.

It should come as no surprise that our friend C.S. Lewis offers worthwhile insight into inspiration. In his essay, “The Vision of John Bunyan,” he considers that writer’s comments about how the classic Pilgrim’s Progress came to be.

Lewis begins with a quotation, and offers his own wise insights, with which I will close.

For having now my Method by the end;

Still as I pull’d, it came.

It came. I doubt if we shall ever know more of the process called “inspiration” than those two monosyllables tell us.

Perhaps we may hazard a guess as to why it came at just that moment. My own guess is that the scheme of a journey with adventures suddenly reunited two things in Bunyan’s mind which had hitherto lain far apart.

One was his present and lifelong preoccupation with the spiritual life. The other, far further away and longer ago, left behind (he had supposed) in childhood, was his delight in old wives’ tales and such last remnants of chivalric romance as he had found in chap-books. The one fitted the other like a glove. Now, as never before, the whole man was engaged.

* Glory to God alone or all glory be to God.