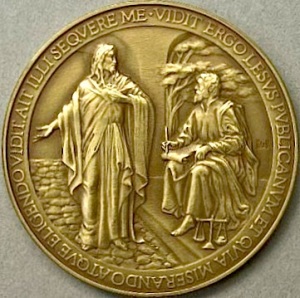 Talk about embarrassing. In a nation that considers God to be its sovereign ruler, it seems rather inexcusable to misspell the name of Jesus.

And yet, that’s precisely what the Vatican has done.

Even more humbling, the error occurred on a very public medium—the principality’s coinage. And, if that was not enough to generate finger-pointing within the Curia, the coins bearing the defective spelling were minted to celebrate the first anniversary of Francis’ assumption of the papal throne.

Having collected coins since I was a young boy, I’m quite familiar with the frequency of minting errors. Typically they are caused by mistakes at the mint itself, where there is a mis-strike or a flaw in one of the dies. (I own a couple of ancient Roman “mules” where the mint workers accidentally used the mismatched obverses and reverses when they struck a particular piece.)

The legend (text) on the aforementioned medallions incorrectly reads “Lesus.” It seems to me that Western sources have mistakenly perceived this as the incorrect substitution of an “L” for the “J.”

The truth is . . . the inscription is in Latin, in which case it is actually an “I” that should appear in place of the “L.” If this is correct, Jesus’ name would be rendered IESUS.*

In actuality, the magnitude of this error was less significant than initially reported. It affected an anniversary medallion, rather than common, everyday coinage that would find its way into the hands of the masses. Also, the mistake was discovered early enough that only a handful of the medals were released; the “lucky” recipients are sure to see the worth of these treasures increase many times over, as their rarity causes the value of the medals to escalate.

Unlike Islam, which forbids images of Allah and Muhammad, Christianity has found iconography related to Jesus to be inspirational, throughout its two millennia history.

The Lord’s face has appeared on numerous coins throughout the years, and there is an entire series of Byzantine issues that cannot be specifically attributed to individual rulers because they did not include their own likeness or name, preferring to yield their place of honor to Christ.

In a 1942 letter to a nun with whom he corresponded, C.S. Lewis shared a poem he had written. I relate it here because of the exquisite reference to religious portraiture on coinage.

From all my lame defeats and oh! much more

From all the victories I have seemed to score;

From cleverness shot forth in Thy behalf,

At which, while angels weep, the audience laugh;

From all my proofs of Thy divinity,

Thoughts are but coins. Let me not trust, instead

Of Thee, the thumb-worn image of Thy head;

From every thought, even from my thoughts of Thee,

Oh thou fair Silence! fall and set me free.

Lord of the straight way and the needle’s eye,

Take from me all my trumpery lest I die.

A Thought for Writers

Everyone who has ever written something read by others understands the importance of proofreading. This is true for digital media such as emails. It’s even more true for print publications that cannot be easily amended.

That said, we can consider ourselves fortunate that our typographical mistakes are not inscribed for all time on precious metals.

* Iesus in the nominative case. It’s more commonly seen as Iesu, and my Latin is too rusty to know how it should correctly be rendered in this inscription.