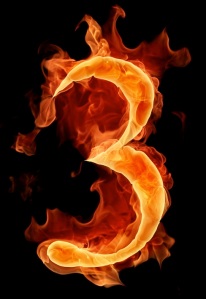 Followers of Mere Inkling will recall that my father passed away last month. Yesterday found our family attending the funeral of our last surviving uncle. My mother was not a superstitious person. Nevertheless, whenever two deaths occurred near the same time, she used to almost reflexively say, “deaths come in threes.”

You may have heard that adage yourself. It’s apparently been around some time, and is occasionally applied to catastrophes in general. However it is used, it is merely a superstition. And, like most such things, if you diligently search for evidence to support it, you can frequently discover some.

I assume that some Christians may even be vulnerable to believing in credulous notions, but this would be a particularly bizarre one for them to affirm since (in terms of biblical numerology) the number three is anything but eerie. Three, after all, represents the Persons of the Trinity.

Of course, many may regard the study of biblical numerology to be a variant of superstition itself. I suppose that depends on the traits you attribute to them. For example, if they are signs of meaning—e.g. completeness such as twelve for the twelve tribes of Israel or four for the writers of the Gospels—there is little controversy.

However, if the numbers themselves are perceived as being imbued with some sort of mystical nature or power, the percentage of scoffers would likely increase. Nevertheless, the ancient Chinese culture, with its billions of members, are keenly attuned to “lucky” and “unlucky” numbers. Good are two and eight, which are homophones for the words “easy/bright” and “prosper/wealth.” Bad are four and six, which are pronounced similarly to “death” and “drop/decline.”

In The Screwtape Letters, C.S. Lewis has the senior demonic tempter advising his protégé about the value of superstitions in numbing human beings to the Truth. In the context of a letter advising how to encourage cowardice in a soldier, he writes:

The main point is that precautions have a tendency to increase fear. The precautions publicly enjoined on your patient, however, soon become a matter of routine and this effect disappears. What you must do is to keep running in his mind (side by side with the conscious intention of doing his duty) the vague idea of all sorts of things he can do or not do, inside the framework of the duty, which seem to make him a little safer. Get his mind off the simple rule (‘I’ve got to stay here and do so-and-so’) into a series of imaginary life lines (‘If A happened—though I very much hope it won’t—I could do B—and if the worst came to the worst, I could always do C’). Superstitions, if not recognised as such, can be awakened.

The point is to keep him feeling that he has something, other than the Enemy and courage the Enemy supplies, to fall back on, so that what was intended to be a total commitment to duty becomes honeycombed all through with little unconscious reservations. By building up a series of imaginary expedients to prevent ‘the worst coming to the worst’ you may produce, at that level of his will which he is not aware of, a determination that the worst shall not come to the worst. Then, at the moment of real terror, rush it out into his nerves and muscles and you may get the fatal act done before he knows what you’re about. For remember, the act of cowardice is all that matters; the emotion of fear is, in itself, no sin and, though we enjoy it, does us no good.

I strive to leave as little room in my life for superstition as possible. Whenever I become aware of it, I immediately seek to weed it out. Life in our fallen world, with my own sinful nature, is difficult enough without adding the burden of carrying superstitions.

Thus, I’m reflecting on our family’s two recent funerals . . . without anticipating another