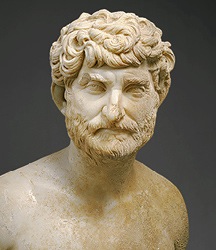 There are many things about ancient Rome that fascinate me. My love for the era finds its roots in the wonderful books of Rosemary Sutcliff and the spectacular cinematic epics like “Ben Hur” that were released during my childhood.

Over the years I’ve studied the Roman world in great depth. I shifted my numismatic interested to coins of the Constantinian era. (You can still purchase the genuine articles relatively inexpensively. Thanks to the tragic individuals who buried their hoards during troubled times and never returned to recover them.)

One of my favorite things about the Romans was their realism which manifested itself even in the busts they carved. Unlike the Greeks who strove to idealize everything, the Romans were pragmatic. If the honoree’s face lacked character (or suffered from an excess of the same), then the artist was expected to reflect that fact.

Just look at all the character in the face of the unknown Roman portrayed above. Or, how about this one. So vivid. Imagine just how difficult life must have been for this thirty-two year citizen.* Yes, they did an impressively faithful job portraying the subjects of their artistic studies.

I’m not naïve enough to think that the emperors’ likenesses weren’t “airbrushed” just a tad. But take a look at the image to the left. It was made of an extremely important person, Pompey the Great, and it’s obviously intended to be a true likeness. This image always reminds me of a troubled chaplain assistant who served with me during my isolated tour in Korea. That sergeant’s tussled coiffure witnessed to a nasty hangover. I cannot attribute Pompey’s unruly mane to the same cause.

C.S. Lewis said the first requirement of art is to engage, to connect in some fashion with the interests of the viewer. He wrote this in his essay “Hamlet: The Prince or the Poem,” which he wrote in 1942.

To interest is the first duty of art; no other excellence will even begin to compensate for failure in this, and very serious faults will be covered by this, as by charity.

If I lined up a dozen beautiful and stylized Grecian busts against one wall and the same number of Roman examples against another, I have no doubt which would merit and receive the greatest attention. Idealized portraiture can be appreciated. But realistic likenesses, that celebrate the uniqueness of each human being, these are truly engaging.

Oh, and in closing let me say that I’m just vain enough—should anyone undertake to create a bust of me—to want it crafted in the Greek style, rather than the Roman . . .