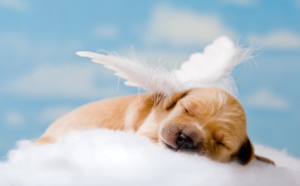 Will dogs and other fauna have a place in the new creation? It’s an interesting—and controversial—subject.

I just reread a delightful essay in which the author, an Orthodox theologian, describes a debate he had with a Roman Catholic scholastic on the subject.* I enjoyed the following description of the discussion so much that I had to share it.

I was once told by a young, ardently earnest Thomist . . . you know, one of those manualist neo-paleo-neo-Thomists of the baroque persuasion you run across ever more frequently these days, gathered in the murkier corners of coffee bars around candles in wine bottles, clad in black turtlenecks and berets, sipping espresso . . . this young Thomist told me that not only could my dog not love me (since he lacks a rational nature), but I could not love my dog (something about there needing to be some rational equality between lover and beloved).

Now, while I admitted that I could only presume the former claim to be incorrect . . . I was adamant that I could be absolutely certain of the falsity of the latter. But my friend was not deterred: “Oh, no,” he insisted, “you don’t really love him; you just think you do because of your deep emotional attachment to him.”

Of course. Foolish of me. Leave it to a two-tier Thomist to devise a definition of love that does not actually involve love. If you can believe in pure nature, I suppose you can believe anything.

{More on the question of animals in paradise below . . .}

Debates (civilized variants of arguments) can be fascinating when they are dissected and examined. Theological debates are particularly enthralling.

C.S. Lewis appreciated the value of debate in sharpening one’s position. This approach to learning can be traced back to the Socratic Method, which is based upon asking and answering questions.

In 1941, the Oxford Socratic Club was formed to “follow the argument wherever it led them.” C.S. Lewis was its first president (faculty sponsor), serving until 1955 when he moved to Cambridge University. In the first issue of the Socratic Digest, Lewis wrote:

In any fairly large and talkative community such as a university, there is always the danger that those who think alike should gravitate together into coteries where they will henceforth encounter opposition only in the emasculated form of rumour that the outsiders say thus and thus.

The absent are easily refuted, complacent dogmatism thrives, and differences of opinion are embittered by group hostility. Each group hears not the best, but the worst, that the other groups can say.

Some of the debates conducted by the club were legendary. You can read a fine article about these “University Battles” here.

Returning to the Question of Animals in Heaven

I wrote on this subject several years ago. That post is worth checking out if only for the amazing graphic that graces it.

You can read my own perspective on the question there, if you are interested.

Today I wish to end, instead, with the summary of my kindred spirit, who debated the philosopher.

The final sentence in this next section is priceless.

The occasion of the exchange, incidentally, was a long and rather tediously circular conversation concerning Christian eschatology. My interlocutor was an adherent to a particularly colorless construal of the beatific vision, one that allows for no real participation of animal creation (except eminently, through us) in the final blessedness of the Kingdom; I, by contrast, hope to see puppies in paradise, and persevere in faith principally for that reason.

His sentiment reminds me of C.S. Lewis’ thoughts in Mere Christianity.

I sometimes like to imagine that I can just see how it might apply to other things. I think I can see how the higher animals are in a sense drawn into Man when he loves them and makes them (as he does) much more nearly human than they would otherwise be.

Hart offers another delightfully sarcastic comment about the weight of different authorities the two debaters were citing. And with that observation, we shall end.

On his side, all the arguments were drawn from Thomas and his expositors; on mine, they were drawn from Scripture; naturally, limited to the lesser source of authority, I was at a disadvantage. . . . [arguing] that the biblical imagery of the redeemed state is cosmic in scope and positively teeming with fauna (lions lying down with lambs and such)—that Paul’s vision of salvation in Romans 8 is of the entirety of creation restored and glorified—things of that sort. All in vain, though; nothing I said could rival the dialectical force of his ringing sic Thomas dixit [so Thomas said].

* The author, David Bentley Hart, is not anti-Catholic. In fact, he has taught at several Roman Catholic universities. The article quoted appears here.