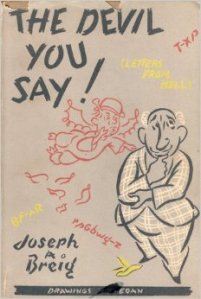 How many letters have you read that were penned in the tradition of C.S. Lewis’ groundbreaking Screwtape Letters?

If you’re a fan of the collection, you’ve probably read similar correspondence that owed its very existence to Lewis’ work.

Now a more sensitive question—have you ever written anything similar to The Screwtape Letters? I must confess that I have. In fact, I’m currently working on a similar collection I hope to finish during the coming year.

Many writers have tried their hand at writing angelic letters, with varying degrees of skill and success. After you finish this column, you might want to check out two examples right here at Mere Inkling: Screwtape Letters Anniversary and Screwtape Goes to War.

Some letters have been composed from the perspective of a heavenly angel (often perceived of as a “guardian” angel). Others have been, like Lewis’ innovative example, written from a diabolical angle. Demons, we recognize, have been cast out of the heavens for which they were created, but they still remain angels, albeit fallen angels.

One of the lures that motivates those who emulate the Screwtape Letters is found in C.S. Lewis’ statement that they were rather easy to compose, once he had undergone the uncomfortable process of placing himself in the mind of an enemy of God.

It is disorienting, to reverse reality. For example, to hate what God loves (i.e. his creation, and especially humanity). And it is this discomfort that Lewis alludes to in describing his reluctance to pursue the genre any further than he did.

For writers, copyrights are precious. It is good news, unknown to many, that current law (at least in the United States) protects everything we write. As soon as it is created (the words are arranged in their unique order), our work is protected by copyright whether or not we use the © symbol.

I say this because the arrangement of words can be protected by law, but “ideas” cannot. (I’m not talking about patents here, but literary ideas or techniques.)

Thus, it’s possible to freely follow Lewis’ example. However, quotations should only be used with permission. (There are, of course, “fair use laws” that describe the acceptable use of quotations in various contexts.)

There was a bit of a scandal a few years after Lewis wrote The Screwtape Letters. Well, “scandal” is too serious a word. More like an awkward and uncertain moment, when an American journalist wrote a book that was clearly inspired by Lewis.

I’ve only recently received my copy of The Devil You Say by Joseph A. Breig. It was published in 1952, and the introduction echoes Lewis’ own. While the letters themselves appear to be independent of Lewis, I suspect the following parallel from the two prefaces shocked Lewis when he saw it.

I have no intention of explaining how the correspondence which I now offer to the public fell into my hands. (Lewis)

I have not the remotest intention of disclosing to anyone—not even my confessor—how these choice tidbits of demonology fell into my hands. (Breig)

Dear Evans I am really very sorry. The Devil you Say got put on a pile of ‘books received’– most of them (I don’t include yours) a major plague of my life–and I forgot all about it. I have now read a few pages: there was nothing to tempt one to go on. It certainly seems to be a gross plagiarism: I am writing to New York Macmillan to draw their attention to it. Thanks very much for sending it. With all good wishes, and thanks also to your American friend. Yours C.S. Lewis

I cannot find any record of whether or not Macmillan challenged the publication of the new volume.

Lewis had no objection to another writer developing his idea about devilish correspondence in their own creative direction. He simply desired to ensure his own work was not usurped.

Before ending, I would not want to leave a negative impression about Mr. Breig. In looking further into the work, one sees just how little resemblance it bears to The Screwtape Letters. It clearly is not plagiaristic. In fact, it’s quite possible that the line cited above was actually intended to be an homage to Lewis.

It turns out that Joseph Anthony Breig (1905-1982) was an accomplished and well respected Roman Catholic journalist.

Breig stayed at the Universe Bulletin until his retirement in March 1975. He continued to write his columns after 1975. They appeared not only in the Universe Bulletin but also in several other Catholic newspapers in the USA. Besides being a newspaper writer, Breig also wrote for many magazines (Ave Maria, Our Lady’s Digest, The Family Digest, Crozier, and others) and published eight books and several short stories and plays.

In honor of his work he received two honorary doctorates (St. Vincent College, Latrobe, Pennsylvania, 1954, and Carroll College, Helena, Montana, 1967). He also won several awards, one of which was the St. Francis de Sales Award from the Catholic Press Association in 1966. (The Book of Catholic Authors).

I’ll close with a final quotation from the same biographical source. When writers gaze at a blank sheet of paper they see many things. Some see it as naked canvas, and others as a challenge. I enjoyed the compliment offered by one of Breig’s editors, who praised his prolific literary production.

“Douglas Roche of Sign magazine . . . holds that Breig cannot endure the sight of a sheet of paper not covered with words.”