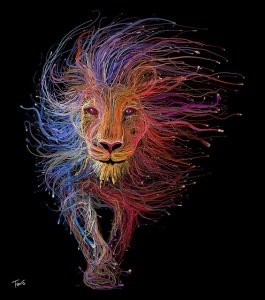 Some of the smartest people around dismiss reading fantasy as a crazy waste of time. At the same time, many of the most brilliant people I know love nothing more than passing from their mundane lives through a magical wardrobe into a land of wonder.

On a recent episode of the television series Castle, the eponymous Richard Castle,* a best-selling author and private eye, has a great line. Castle is defending his hyperactive imagination (which frequently leads to the solving of the crime of the week).

A suspect calls him “reality-challenged.”

To which he responds, “I prefer fantasy-augmented.”

Now, there’s a description that would fit most readers of Mere Inkling. We’re “fantasy-augmented.”

It would also fit most of the Oxford Inklings. Not all of them, of course. Some of them, like C.S. Lewis’ brother Warnie, were more oriented towards factual, historical literature.

The fantasists among their ranks were not lacking as writers of nonfiction either.

However, it was the fact that they were “fantasy-augmented” that has led to the inclusion of several of their members in the first ranks of twentieth century writers.

Narnia and Middle Earth are as real to many people today as Ogre, Latvia, Humpty Do, Australia, Llanfairpwllgwyngyllgogerychwyrndrobwllllantysiliogogogoch, Wales, and Frankenstein, Missouri. (Perhaps more real!)

In 1936, C.S. Lewis wrote a letter to Charles Williams, praising his recent novel.**

A book sometimes crosses ones path which is so like the sound of ones native language in a strange country that it feels almost uncivil not to wave some kind of flag in answer.

I have just read your Place of the Lion and it is to me one of the major literary events of my life–comparable to my first discovery of George Macdonald, G. K. Chesterton, or Wm. Morris.

The following day, Williams wrote a letter of his own to C.S. Lewis. It began:

My dear Mr Lewis, If you had delayed writing another 24 hours our letters would have crossed. It has never before happened to me to be admiring an author of a book while he at the same time was admiring me. My admiration for the staff work of the Omnipotence rises every day. To be exact, I finished on Saturday looking—too hastily—at proofs of your Allegorical Love Poem.

William’s reference to coincidence is poetic. He doesn’t rely on the timeworn “divine Providence,” which is so prevalent in literature of the eighteenth and nineteenth centuries.

Returning to Lewis’ missive, we learn exactly how Williams’ fantasy so deeply impressed him.

A book sometimes crosses ones path which is so like the sound of ones native language in a strange country that it feels almost uncivil not to wave some kind of flag in answer. I have just read your Place of the Lion and it is to me one of the major literary events of my life—comparable to my first discovery of George Macdonald, G.K. Chesterton, or Wm. Morris.

There are layers and layers—first the pleasure that any good fantasy gives me: then, what is rarely (tho’ not so very rarely) combined with this, the pleasure of a real philosophical and theological stimulus: thirdly, characters: fourthly, what I neither expected nor desired, substantial edification.

It’s unlikely that any of us should ever author a work that would equally impress C.S. Lewis. Still, what a grand goal for any fantasy-augmented writer to strive for!

* Castle is played by Nathan Fillion, who captained the spacecraft “Serenity,” in a delightful series entitled Firefly.

** You can download The Place of the Lion in a variety of formats at ManyBooks.

The illustration above is used with the permission of its creator, Charis Tsevis.

13 thoughts on “Is Fantasy Foolish?”