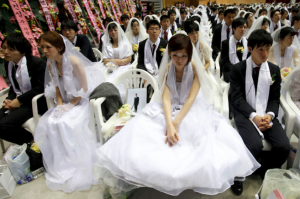 Should a wedding ceremony during which the bride forgets the groom’s name be considered valid? That question may sound slightly preposterous, but I just witnessed it happening.

One of the network news programs just did a story on the latest “Holy Marriage Blessing Service” conducted by the Unification Church. This is the religion founded by Sun Myung Moon, whose disciples believe to be the second coming of Jesus. (Moon died in 2012, but his wife continues to lead the religion, and officiate at these regular ceremonies.)

Many of the couples who marry in these ceremonies are matched by their parents or, if they are determined to be especially blessed, they are “randomly” matched by the church leader (presently the widow of their messiah). Reportedly, each match takes about thirty seconds as the prophets place the hands of men and women together in divinely appointed relationships.

Officially, a person can decline their match after they’ve had a little time to talk with their future spouse, but it’s evident that contradicting the action of one’s savior would require immense courage.

That said, I have no doubt that—due to the earnest commitment and efforts of both parties—many of these marriages end up happy. After all, as C.S. Lewis wrote in Mere Christianity:

Knowledge can last, principles can last, habits can last; but feelings come and go… But, of course, ceasing to be “in love” need not mean ceasing to love. Love in this second sense — love as distinct from “being in love”—is not merely a feeling. It is a deep unity, maintained by the will and deliberately strengthened by habit; reinforced by (in Christian marriage) the grace which both partners ask, and receive, from God. . . . “Being in love” first moved them to promise fidelity: this quieter love enables them to keep the promise. It is on this love that the engine of marriage is run: being in love was the explosion that started it.

In the case of Unification Church members, even if the relationship lacked an emotional stage of “being in love,” it doesn’t mean that it is destined to fail. Far from it, since, as Lewis wisely points out, true love isn’t about feelings.

In the aforementioned case, the bride was from a French-speaking African nation. The husband, I believe, was from Japan. Her English was quite good, but his was poor. They were essentially unable to communicate. Then, when the interviewers revisited them immediately before the ceremony was to begin, they asked the beautifully-gowned bride what her husband’s name was. And she had forgotten.

Another peculiar thing about Unification marriage practices is that, following the wedding, there is a 40+ “separation period,” during which they are required to refrain from intimate relations. While Christians are called to practice premarital chastity, I’m unfamiliar with any other group that requires a post-wedding purification.

One last comment about the Unification marriage blessings. As if they could not be more bizarre. In 1997 the Moons presided over a ceremony in Washington, D.C. While only 2,000 of the 30,000 couples were actually being married, among the other 28,000 couples having their marriage “blessed” by the Unification messiah included a prominent American political figure—none other than Al Sharpton.

At least he and his wife, Katherine, probably knew each other’s names.

The picture above comes from one of the group weddings. This young bride has to be content with the photograph of her absent groom. One wonders if the two have yet to meet.

11 responses to Married, or Not?