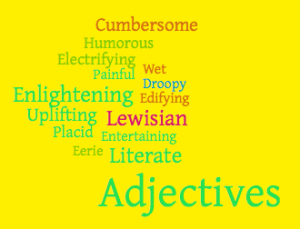 Mark Twain was a fount of wit and wisdom.* I recently encountered this astute maxim attributed to him.

A man’s character may be learned from the adjectives which he habitually uses in conversation.

While the statement rings true, it turns out that Mark Twain is not the person who coined it.

That honor belongs to Henry Theodore Tuckerman (1813-71). The confusion is apparently due to the fact that Twain’s future bride, Olivia Langdon, began compiling a commonplace book while a teenager, in which she included this paraphrase of one of Tuckerman’s observations.

The actual quotation comes from an 1850 volume in which he wrote:

It is amusing to detect character in the vocabulary of each person. The adjectives habitually used, like the inscriptions on a thermometer, indicate the temperament. (The Optimist, “Conversation”)**

C.S. Lewis was not a fan of the excessive use of adjectives, as I have written about in the past.

Don’t use adjectives which merely tell us how you want us to feel about the things you are describing. I mean, instead of telling us a thing was “terrible,” describe it so that we’ll be terrified. Don’t say it was “delightful;” make us say “delightful” when we’ve read the description. You see, all those words (horrifying, wonderful, hideous, exquisite) are only like saying to your readers, “Please, will you do my job for me?”

Despite Lewis’ warning, I have to confess that I love adjectives. When they are creatively chosen, I find them illuminating, provocative and welcome. In fact, the ideal adjective accomplishes Lewis’ goal of conveying an emotion, not simply describing it.

And, as we have been reminded today, adjectives have the additional benefit of giving us glimpses into the personality of the authors themselves. “It is amusing to detect character in the vocabulary of each person. The adjectives habitually used, like the inscriptions on a thermometer, indicate the temperament.”

Researching this subject I encountered an interesting quote from a popular Chilean-American writer, Isabel Allende.

I want to have an epic life. I want to tell my life with big adjectives. I want to forget all the grays in between, and remember the highlights and the dark moments.

While I can understand her desire to live an epic life, and applaud the accompany image of living one’s life with “big adjectives,” I have to say I am a bit disappointed in her choice of adjective itself. “Big” adjectives? “Vast,” “immense,” “deep,” and “complex” are just a handful of the substitutes that might convey different aspects of the concept “big.”

Perhaps she originally penned this in Spanish, and chose just such a “bigger” word? But then again, I assume she would do all of her own translation work. So it could be she was striving for irony? Not having read her work, I cannot say with any confidence.

Still, if I do expose myself to a greater quantity of her “adjectives habitually used” . . . I have no doubt I can gain some insight into her literary temperament.

* If you are curious as to whether Twain was a “fount” or a “font,” check this out.

** You can find more of his wisdom by downloading a free copy of Selections from the Writings of Henry Theodore Tuckerman.