One Positive Consequence of Disasters 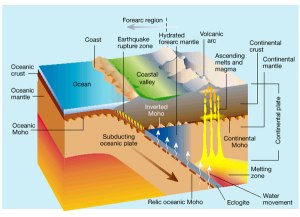 I spent this morning participating in Major Disaster Response Training at a nearby United States Naval installation. It is connected to the national readiness programs coordinated by FEMA (the Federal Emergency Management Agency).

Thankfully, these plans and preparations have improved dramatically since the tragic events surrounding Hurricane Katrina.

Our “local” exercises will continue tomorrow, with extended brainstorming about a number of scenario variations. They will all be based upon an inevitable 9.0 magnitude megathrust earthquake destined to occur just off the coast of Washington and Oregon states.

The last mega-earthquake in the Cascadia Subduction Zone took place in 1700, and pressure between the earth’s drifting plates continues to build, day by day. When that pent up energy next breaks free, it is likely to affect the volcanoes which run in a fevered band from Alaska to northern California.

The potential for damage and loss of life is great, and barring the return of Christ before the event . . . as I said above, it is inevitable. Geological evidence reveals that these massive upheavals have taken place every 300 to 600 years, for the past three and a half millennia.

Advance planning can help reduce the casualties. More specifically, it enables governmental agencies and other groups to prepare before the event to respond to the crisis as effectively as possible. Better coordination results in less overlap and fewer gaps, especially during the first critical hours when trapped people can be rescued alive from the rubble.

As I sat in the meeting I thought for a while about the other members of the clergy who were in attendance. They earnestly want to learn how to help prepare their congregations for such events, so their church members can recover quickly—and then, in turn, be able to aid everyone else in the community. Everyone attending the meetings here is a volunteer. It’s not their “job” to provide assistance and care to others . . . it’s their calling.

The title for this column mentions a “positive” aspect of disasters. It is this: they provide an opportunity for the very best and most heroic attributes of men and women to be revealed. In the worst of times, the best qualities of humanity shine most clearly.

C.S. Lewis took note of this truth. In his Screwtape Letters, wherein a senior devil provides temptation advice to a junior demon, Lewis addresses this great irony. In horrible circumstances, great good may be manifested.

Now this is a ticklish business. We have made men proud of most vices, but not of cowardice. Whenever we have almost succeeded in doing so, the Enemy permits a war or an earthquake or some other calamity, and at once courage becomes so obviously lovely and important even in human eyes that all our work is undone, and there is still at least one vice of which they feel genuine shame. The danger of inducing cowardice in our patients, therefore, is lest we produce real self-knowledge and self-loathing with consequent repentance and humility. And in fact, in the last war, thousands of humans, by discovering their own cowardice, discovered the whole moral world for the first time.

In peace we can make many of them ignore good and evil entirely; in danger, the issue is forced upon them in a guise to which even we cannot blind them. There is here a cruel dilemma before us. If we promoted justice and charity among men, we should be playing directly into the Enemy’s hands; but if we guide them to the opposite behaviour, this sooner or later produces (for He permits it to produce) a war or a revolution, and the undisguisable issue of cowardice or courage awakes thousands of men from moral stupor.

God forbid that natural disasters occur. However, when they do, we can praise him for his acts of benevolence, mercy and healing . . . which are frequently offered through the courageous actions of his children.

May you and I prepare ourselves—physically, mentally, emotionally and spiritually—to be instruments of his grace and peace whenever the need arises.